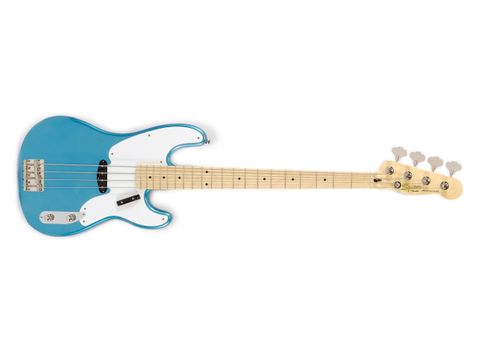 Excellent value for money, and a great old-style bass with some subtle updates.

The new Squier range of Classic Vibe guitars impressed us greatly, but what of the bass options? Three models are available but our eye was taken by the more unusual design in the range, this '50s Precision in a lovely Lake Placid blue gloss polyester finish.

Based on the so-called 'transition' P-bass as produced in the mid-fifties, it features the contoured body that replaced the original slab design, coupled to the early all-maple neck with a Telecaster-like headstock.

Custom colours for basses were few and far between back then so choosing this as the only colour option seems odd, but we're not complaining.

The thinking behind the Classic Vibe series is just as it says. These are not accurate replicas but a modern take on a vintage look with the feel remaining intact while taking advantage of more modern design.

Hence the greatly improved electronics and bridge unit - although the traditional raised-tail bridge design is retained, these 'HiMass' proportions are far more generous and the whole thing is much sturdier.

And this does feel like a brand new fifties bass to play, including the very generous string spacing. The neck may feel a little broom handle-like by today's standards, but that's the way they were, so…

The thick single-ply white scratchplate is a dominant feature but here it acts as a colour transition between the somewhat anaemic neck and the striking body finish. Although the chrome-plated cover plates associated with this design originally are not included, the black finger rest is, which helps to break up the expanse of white.

The solitary single-coil pickup may look like the one used on the first Fender basses, but this is a far more competent unit that provides clear tones and allows the strings to speak evenly.

As always the single passive tone control is limited in ability, and the position of the volume control still plays a part in the overall sound. But the bass end is warm and fruity and the top end provides attack rather than becoming glassy.

Ease the tone up a fraction from the bass-end and you get both warmth and edge and this is what gives you the punch that P-basses are known for. So, although limited in tonal options compared to some other passive circuits, this will deliver all you would expect from a classically styled instrument, plus there's a modern sheen to the sound.

Some of you may think that the old saying of 'if it ain't broke, don't fix it' applies here, but in reality this early design was flawed and even in this budget line example Squier has attempted to put things right.

The other two basses in the range are equally well conceived and we strongly recommend trying all three if you're looking for an affordable version of a classic.

Which model you favour is, of course, a personal choice, but for us this modernisation of what was essentially just a passing phase in the development of the Precision bass is a real beauty.

Whether you are just starting out on the bass road or you simply fancy another instrument with a different vibe, this bass will fit the bill admirably. With that fifties styling and feel intact, and at this agreeable price, it's hard not to indulge.