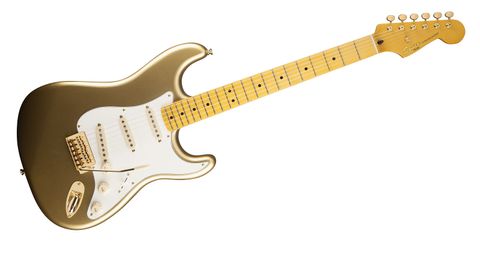 The guitar's aural presence doesn't sparkle as much as its finish, but it's rammed with usable tones to suit a huge range of genres - yet more proof that 60 years on, the Strat is still worth its weight in gold.

It's hard to believe the Strat is 60. As well as influencing just about every other guitar builder under the sun, it still attracts its fair share of modern-day players, too.

To commemorate the ol' sexagenarian, Fender has launched a number of 60th Anniversary Strats, starting at just less than a grand. Fortunately for us, this isn't a VIP-only party, and Squier's commemorative offering lets us sneak past the bouncers. The Classic Vibe '50s Strat has a clear message: if it ain't broke, don't fix it; just pour gold all over it.

The finish? Aztec Gold. The hardware? Gold-plated. The pickguard screws? Bla... nah, even they're plated in the stuff. Our only disappointment is that the pickup polepieces are silver, although the gleaming, laser-engraved 60th Anniversary neckplate makes up for that, and reinforces this guitar's collectable status.

Of course, a Squier is made to be played, not to stand in a glass case, and you'll want to get your hands all over this one. Despite the '50s moniker, the Classic Vibe has a modern C profile neck, which will feel like home for players of contemporary Strats.

While it may be a little glossy for fans of high- end and vintage Strats, it's not a million miles away from The Big F's new 60th Anniversary Classic Player '50s Strat - and at half the price. The Synchronized vibrato apes the supple action of more expensive models, too, and works perfectly for smooth pitch bends and subtle surf shimmer.

Plug in, and the Squier delivers the obligatory five-way options, complete with dual tone controls for the neck and middle pickups. But while the usual settings are there - moody neck, in-between funk, slicing bridge, and here,    a particularly strident middle - it's not the snappiest Strat we've ever heard, and lacks a little presence.

Still, anyone who finds the traditional Strat honk too obnoxious will be pleased with the Squier's sonic performance. And if you feed it a bit of dirt, that signature sonic template cuts through, particularly when you engage the searing bridge pickup. There's still the perennial hum with all-out distortion, and a touch of treble bleed as you roll back the volume, but these idiosyncrasies are all part and parcel of the authentic Strat experience.