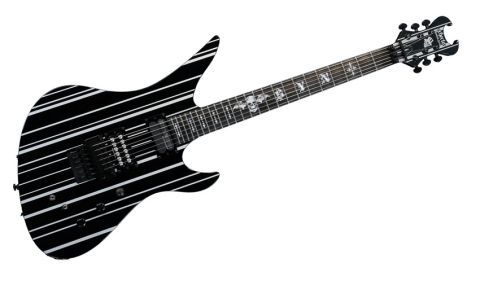 For just over a grand, Schecter is delivering an immensely shreddable pro-quality guitar.

For a guy whose name sounds like a dilapidated nursing home from a Tim Burton film, Synyster Gates has done all right for himself. His band, Avenged Sevenfold, have sold millions of records. He has a line of signature models from Californian guitar company Schecter. And what's more, Gates has clearly enjoyed full creative control when spec'ing this latest model, the Custom-S.

Some signature models remain relatively anonymous - a lacquered signature on the back of the headstock is often the only stylistic personalisation. But every aspect of the Custom-S screams Gates.

Finished in pin stripes, the mahogany body cuts an aggressive silhouette; the pearloid Death Bat inlay on the 12th fret completes the picture. Where the Custom-S differs greatly from the Custom is that it pairs a Seymour Duncan Synyster Gates Invader bridge humbucker with a game-changing Sustainiac 'bucker in the neck.

Powered by a nine-volt battery, the Sustainiac driver takes the pickup's signal and turns it into vibrational energy, then feeds the energy back into the string for infinite sustain. A two-way mini-toggle switch turns it on and off, while a three-way mini- toggle switch selects between three settings: Normal, Mix, and Harmonic.

Mastering the Sustainiac's musical potential is a little tricky, but it's a lot of fun, too. The Normal setting is the easiest to get to grips with, retaining the string's natural tone and sustaining indefinitely. In the Mix setting, depending on where you fret a note, harmonic feedback resonates over the guitar's natural tone - the effect is not unlike using a loud, overdriven amp.

The Harmonic mode is altogether harder to tame, as fretted notes surrender themselves immediately to squealing harmonic feedback - even when you're using a clean tone, the effect is over the top.

And that is the impression left by the Custom-S: it's OTT by design, and sounds as unsubtle as it looks. Gates' signature Invader in the bridge position is a gnarly beast, with three ceramic magnets and overwound coils rinsing as much output as possible from a passive pickup. It can sound shrill; with clean tones it lacks character, but its harmonic response and attitude is perfect for metal guitarists. Finally, The Floyd 1000 Series is as good a locking vibrato unit as we have used.

It's unfortunate that it's so aggressively styled; it really is for Avenged Sevenfold fans first and foremost. The rest of us can only hope Schecter release a more generic model with a similar spec. They'd be mad not to.