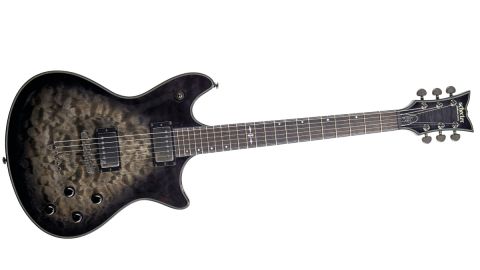 Worn low, this is a consummate heavy rock and metal guitar, but not particularly adept in performing in other styles.

Although we've covered and reviewed some examples of its high-end USA custom shop models in the last few months, Schecter is still best known as a manufacturer of rock and metal guitars.

The instrument reviewed here reflects once again the company's predilection for these musical styles and further contribute to its quite bewildering catalogue of top spec rock guitars, catering for every conceivable genre and sub-genre within that compass.

The Hellraiser Hybrid range was introduced in 2014 and, as the name suggests, is a hybrid of the most sought after features of Hellraiser and SLS series of guitars. Taken from the Hellraiser range, for example, is the highly figured quilted top, whereas the neck style has been lifted directly from the SLS series.

The Tempest refers to the body shape, and was once offered by Schecter as a model in its own right. It was discontinued a number of years ago but has been resurrected here and incorporated into the Hybrid series.

With an unusual and unique body shape, there is a definite Tele influence here and also a passing resemblance to a Knaggs Steve Stevens model. The body depth is comparable to a Les Paul and similarly has a figured and carved maple cap, which Schecter has slightly redesigned for the Hybrid series to possess a more sculptured arch.

Its transparent black burst finish, with carbon fibre binding, is the only colour option on this Hybrid series. To our eyes, there's more than a hint of dark green in the hue and, set against it, the carbon fibre binding actually looks like snakeskin - a positive or negative, depending on personal taste!

All important, the neck is a slim but comfortable affair, sporting a compound radius and ebony 'board. Easy playability is a trademark of Schecter and this model is no exception: beautifully set up with top-notch craftsmanship from its South Korean factory.

The prominent carved arch of the Hybrid Tempest certainly makes its presence felt strapped on. Those used to playinga carved top instrument probably won't experience any discomfort from the picking hand position forced upon you by the body contouring, but we found this guitar more comfortable played slung low so the inside of your forearm isn't being pressed so hard against the outside 'lip' of the body.

Possibly due to the unusual body shape, the vaunted "increased upper access cutaway" of this range is not keenly apparent. Instead, you're afforded the same kind of upper fret access that, say, a traditional single-cut shape grants.

On a dirty amp setting, the Tempest's active EMG bridge pickup pushes the amp as much as you'd expect it to, but the 57 has been designed to give a more PAF-like tone by using a combination of Alnico V magnets and steel pole pieces. It succeeds, too, albeit with a tad more warmth and gain, and proves a great platform for any heavy rock or metal style you choose to throw at it.

There's an innate playability to Schecter's guitars that makes you feel like you've been playing them for years. Even though this is a very capable rock guitar, the very mention of the name Schecter will automatically confine the subject guitar to the 'metal' category.

We suspect that Schecter will be happy with such pigeon-holing because the headstock and overall metal aesthetics of the review model - and indeed many of its other ranges - is hardly going to endear them to any other type of player.