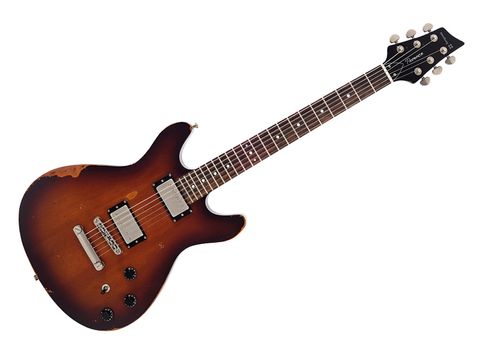 A fine original but 'familiar' design that sounds and feels as old as it looks. Quite a find!

Featuring 'standard hardcore aging' this is, believe it or not, a brand new guitar from German-based company Sandberg.

The firm was founded by Holger Stonjek in 1986 and is known primarily for its basses (although it has always made guitars) and the guitar looks, well, totally knackered. In fact, the initial impression is so deceiving we wondered if we had the right guitar or rather one our team's well-gigged vintage pieces from the 1970s.

Of course, the illusion doesn't last: the Florence is an original design, not a million miles away from a symmetrical double-cut Telecaster, albeit with a subtly graduated carved top (actually separate pieces of wood with a thin contrasting veneered sandwich visible around the edge) and a maximum depth of 47mm.

The all-mahogany construction is suitably weighty, but the 'nitro-cellulose mix' finish is thin and, we'd wager, nicely applied before Sandberg starts its ageing process, which accurately reflects forearm wear, extensive belt-buckle wear on the lip of the rear ribcage contour and a lot of side wear. Clearly, it would have been owned by a pretty cavalier, hard-rocking player who cared little for their guitar!

Somewhat strangely, there's no wear to the neck (although the edges of the headstock again see plenty of chipping action). It's a full-ish 'C' profile - 21mm deep at the first fret, 23.5mm at 12th - with quite a chunky full-shouldered feel that seems modelled on, perhaps, a chunkier 1958-era Les Paul.

The cutaways are a little cramped and access isn't quite as good as it might seem, but the 'board is nicely fretted and the edges lightly rounded giving a quality played-in feel.

Dual Sandberg-designed humbuckers in beautifully aged nickel plated covers are controlled by a dual volume and master tone network, selected by a standard three-way toggle while the output jack is a screw-in Tele-style barrel type.

There's a slightly stiff feel to the guitar and good, though not spectacular, acoustic ring. But plugged in, frankly, it sounds as old as it looks.

With PAF-alike outputs, both humbuckers excel with a beautiful bell-like attack that gives roundness and clarity to arpreggiated chords: think early Zep, Exile-era Stones and a lot more. Classic rock and blues licks drip off the guitar.

It's a big ol' sound too, a little weighty with a chunky neck to match. It's not huge bass-wise but not deficient either and, while the high-end is a little rounded, that classic Gibbo mid-range grind is easily achieved.

With cleaner amp tones and especially the mixed pickups we find some great clean blues voices or darker, lo-fi vintage funk. Think vinyl, valves… Certainly, some might miss a crisper high-end clarity that a maple top might bring (although the Florence is available in a maple-topped version, too), while others will think it's the rock/blues guitar of their dreams.

It's silly really - a brand-new original guitar made to look so knackered. But if you've been around vintage and old guitars all your playing life, we'd wager you'll get it.

Sorry, but it's not just a visual illusion - it sounds and feels like an old guitar. The sort of piece you might discover in a dusty corner of a store and, well, just fall in love with. Beautifully made and vintage-informed it's a celebration of the past… warts, dings an all.
So you thought Sandberg just made basses? Think again, this is a special piece.