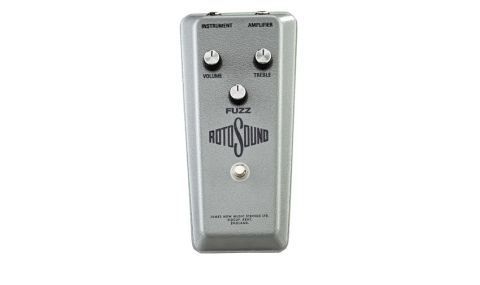 Stunning fuzz tones, from Beck to Auerbach and beyond.

Rotosound's original 1960s fuzz pedal Reissue is so rare that even the firm itself didn't have one to call its own. Now, thanks to an Arizona collector, it's been studied and reissued as the RFB1 you see before you.

Whether your Holy Grail is Keith Richards' Maestro Fuzz-Tone on Satisfaction, Jimi's Fuzz Face-powered deep-space exploration or the raunchy Tone Bender sounds of Yardbirds Beck and Page, the second half of the 1960s saw fuzz boxes stamped indelibly into the rock guitar lexicon.

Fuzz aficionados tend to be obsessive sorts, as witnessed by the bewildering array of boutique interpretations of the classics and out-there esoterica available to those who like their guitar sound to sport anything from a five o'clock shadow to a full-blown Viking beard.

It's not for everyone, but with the likes of Jack White and Dan Auerbach continuing to bother daytime radio playlists, there's no danger of fuzz going the way of spandex any time soon.

Rotosound is a name that will always be associated with strings, but wind the tape back to the heady days of 'Swinging London' and, up against competition from Gary Hurst's Sola Sound and Vox-branded Tone Benders, and numerous derivatives, company founder James How decided Rotosound needed a fuzz box of its own. Jimmy Page was photographed using a Rotosound fuzz on several occasions in 1969, but originals were few in number and are now very rare indeed.

So much so, in fact, that the company itself has very little information about those 1960s models. Contact from an enthusiast in Arizona set the ball rolling for the reissue project, but despite an exhaustive search of the archives, present-day Rotosound chairman Jason How couldn't even find original catalogue photographs, although he did locate a product listing, complete with the 1968 purchase price of 12 guineas.

How believes that the original was most likely designed by Gary Hurst, and after Rotosound obtained an original model, former BBC electronics engineer Dr Barry R Pyatt was enlisted to work on the reissue - within the boundaries of modern semi-conductor availability and safety legislation.

The core tone-generating elements of the original circuit have been retained, with a 'Darlington Pair' of NOS germanium input transistors driving a third, temperature-compensated 'fuzz' transistor on a neatly hand-wired 'board.

As opposed to the less flexible arrangement of level and attack controls on Hurst's original 'Benders, the RFB1's volume, fuzz and treble pots are simple to use but allow a broad range of tones to be sculpted.

Although the nature of the circuit means compatibility with an external power supply would be a compromise too far, the pedal has a very low current drain, so expect a single PP3 battery to survive months of heavy usage.

The huge, wah-sized moulded steel enclosure is extremely robust, but its footprint may deter some players given the current trend towards miniaturisation in the world of guitar effects. A nod to modernity comes in the shape of true bypass switching, and anyone familiar with the bucking bronco ride of original 1960s fuzz boxes should expect a much less bruising experience with this beast roped into their signal chain.

There may be no LED power indicator on this pedal, but you sure as hell know when it's switched on. As a rough guide to where the RFB1 sits on the fuzz spectrum, think somewhere between the frying-pan sizzle of a Fuzz Face and the fat sustain of a Sovtek Big Muff, without the Muff's tendency to go missing in a live band mix the moment your bass player comes in.

The range of the fuzz control easily allows you to channel the still-thrilling sounds of early Beck, Page and Hendrix right through to formidable Black Keys-style girth that just loves low-register, dirty single-note blues riffs. Rolling the guitar's volume back from here yields a scratchy vintage overdrive that's equally effective in a contemporary lo-fi garage or indie-rock context.

The treble control appears post-fuzz in the circuit, and rolling it off doesn't just reduce high-end, it also adds fatness, with a swampy, smoky vibe that's just made for open-tuning blues. On the other hand, crank all three controls right up, flip to your guitar's neck pickup and it's easy to lose hours riffing your way to stoner-rock heaven.

It's massive, it's expensive, there's no LED and you can't use it with a power supply. But - and it's a big but, we cannot lie - if you're a fuzz nut, you simply have to try it. The RFB1 might be a limited-run reissue, but it's no museum piece; the fuzz tones it produces are infectious, inspiring and big enough for any stage.