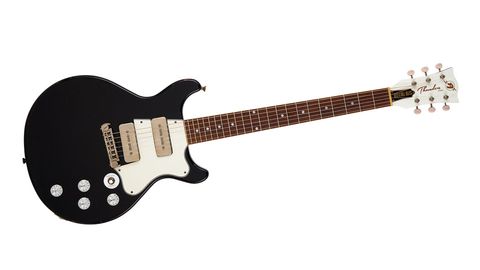 We can't fault Billy Rowe's execution of the 'plain mahogany with twin-P-90s' theme.

If a real 50s Junior is on your radar but off limits due to vintage prices, then perhaps this San Francisco built gem from Rock 'N' Roll Relics might just sneak in under budget.

Luthier Billy Rowe hand-builds his Rock 'N' Roll Relics guitars to an exacting recipe. Each one is constructed using select timbers, then finished in nitrocellulose and aged to three different levels of distress.

It's not just the bodies that are meticulously considered either - tuners, bridges, pickups, pots and capacitors are specially sourced and, while hardly cheap, the guitars come in at considerably under the equivalent 'name' model.

Although not a verified signature model - Rowe makes a 'Townshend', a 'Richards' and others, too - Billy claims the Thunders estate has given it the thumbs-up. "With some of the model names it's more of a salute to heroes that introduced certain guitar styles to the masses. It is a bit cheeky, but it's a hats-off."

With African mahogany body and neck and a 22-fret bound rosewood fingerboard the guitar has 'cool' stamped all over it. Look deeper and things get even more interesting.

Rowe has thought carefully about what goes onto, and into, his instruments. Pickups are by a new name to us, David Allen, who is gaining prestige among the pickup cognoscenti.

"I was introduced to David through a customer who said that we should meet, since we only lived about 10 miles apart," Rowe reveals. "Once I heard David's pickups I was sold; he has captured what vintage pickups deliver in tone but with consistency."

These are his Philthy Cats P-90s, the highest output of the three sets he builds in this style. You may also notice that the neck pickup is set back somewhat, even further rearwards than Gibson's original double-cut Special. Billy tells us this is, as it was at Kalamazo, "for structural reasons, but tonally I think it adds something, too."

"Emerson Custom potentiometers are fantastic," Billy enthuses. "The tolerance when you roll the knobs feels perfect and they meter all their pots so you have consistency with the output."

Finish is extra-thin nitro and Rowe handles the ageing himself. "We finish to a brand new look," he adds. "Then I take each one through my time machine to give it that broken-in, played-to-hell look. Another touch is our headstock stinger [the decorated rear, in this case a cool chequerboard finish]. I always loved the look but it's rarely seen these days."

Rowe's necks come in three sizes and ours, in 60s guise, is the slimmest. Add total access due to the 22nd-fret neck join and this slab of rosewood is a veritable playground. Fret-ends protrude over the binding as this prevents potential string catching. The fret-job is perfect and the Thunders gives back whatever you put into it.

Using a cranked Marshall JTM45 a host of fabulous tones is soon revealed. David Allen's P-90s retain all the hallmarks of a great original, with bark and girth aplenty.

The neck unit's move back lends a most pleasing sound; it goes from chiming to warm with no mushing at all. Flip to the bridge and it's fat and raspy, and while it cleans up beautifully, too, when wound up it really comes into its own.

The big surprise is the middle position: it's sublime, like a Tele meets a Rickenbacker down Gretsch alley! Crashing chords through our Bletchley beast sound mighty indeed. It's a wonderful sounding instrument: David Allen pickups and African mahogany would seem the perfect pairing!

Simple is so often best. True, the simplicity here owes much of its charm to another time and another state (Michigan), but we can't fault Billy Rowe's execution of the 'plain mahogany with twin-P-90s' theme.

His ageing deserves mention, too: the Thunders really looks like it's worked hard but been cared for over 50 years of toil. It sounds great and plays superbly, so what more could one want?

Of the Thunders Billy says: "I love the simple, no-frills approach and the double-cut Junior style guitars with a wraparound bridge and P-90s have a magical sound. They ooze rock 'n' roll and deliver ultimate tone whether clean or dirty." And who, good people, are we to argue with that?