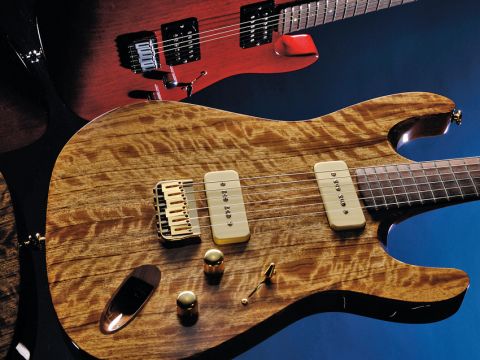 After Rob Williams left Patrick Eggle guitars in the mid-nineties he began working under the name Woodworm. In many ways an old-school British custom maker, Rob is a one man band without a CNC machine in sight.

Known for the bolt-on neck CS and CT models which have earned him the tag of 'the UK's Tom Anderson', Williams was working on an all-mahogany CS-4 around three years ago, and wondered what would happen if instead of drilling four holes for the neck screws, he glued it in and shaped the heel instead. Welcome, the Rob Williams Set Neck.

The neck's build quality is equally impressive. The laminate is made up of three sections of Brazilian mahogany, accompanied by two maple/walnut/maple stringers. The neck-to-body join is clearly visible, while the heel area extends to meet the neck under the 16th fret.

The inner edges of the cutaways are slightly chamfered and top fret access is comfortable and easy. Overall finishing (acrylic over an epoxy sealer) is done by Williams too - it's intentionally very thin and there's a little sinkage in places which certainly doesn't bother us.

Oh, and check out the rosewood jack socket cup. Rob explains: "I thought what could I do by hand that would require a ridiculous amount of programming on a CNC? When I'd done it I thought, copy that!"

In terms of profile the neck has a really comfortable 'C'-type section measuring 20mm deep at the first and 22mm at the 12th, and a very clean and tidy Brazilian rosewood fretboard that uses a Stewart-MacDonald wire approximately approx 2.38mm wide x 1.2mm high with a nice, classic feel.

Equally classic is the six-in-a-line back-angled headstocks, both neatly faced, with the gold script Rob Williams logo matched to the hardware plating colour. Hardware itself matches the construction quality, the six saddle Hipshot bridge strings from the back, Tele-style.

Pickups are made by Williams adding yet more personality to the guitar. The Deluxe's soapbars have relatively matched outputs with master volume and tone controls alongside a three-way lever selector that offers neck, both and bridge voicings.

Acoustically the Deluxe displays high-end crispness and zing and plugged in it breathes with a 3-D character, twangy on cleaner tones, surprisingly girthsome with more gained styles, and all three pickup selections seem to sit in the classic area to our ears.

Through a clean channel you could be playing a Fender/Gretsch hybrid - a timeless tone that you can associate with virtually any style from old-style snappy blues to modern strummy power pop, Americana or country.

With some crunch added the neck pickup really impresses with a fulsome chewy texture and bags of character; the bridge soapbar veers on the bright side and benefits from a little tone reduction to get into the Gibson P-90 ballpark.

A little more poke from the bridge pickup would probably help. Yet P-90-equipped guitars are always hard to pigeonhole and while there's pickup hum used individually, together they're hum-cancelling.

By its very nature, a custom one-off guitar is all about your own specific requirements. It's very different from a production guitar that is designed to sell in numbers, invariably with a broader appeal. Rob Williams, however, falls into both camps: a one-man band who eschews out-of-house CNC parts production to produce mainstream-style instruments to a craft level that's disappearing fast.

That said, you don't need a hand-hewn masterpiece to make great music and Williams' skills will be lost on many. But those looking for a specific tool, or something different from other boutique production instruments, should look closely at one of the UK's finest and most experienced makers.

These Set Neck models hint at a new direction that pulls in various styles and creates something unique but not radical. Combine that with Williams' own hand-wound pickups and we have something that's a lot more individual than most.

Such craft and uniqueness doesn't come cheap but we suspect if you're on a tight budget you're probably not reading this. Rob Williams may not yet have the name of some higher-profile makers but he does have the craft skills and understanding of the instrument to be considered on the same lofty platform.