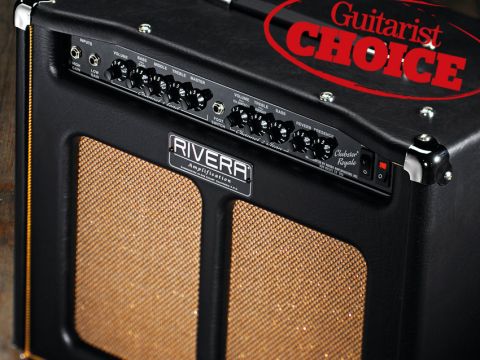 A highly versatile amp that will reward and inspire for many years to come.

Paul Rivera is one of the world's most influential amp designers, with a career that's encompassed Mesa Engineering, Yamaha, Music Man and Fender, where he revived that company's amp fortunes in the early eighties with a range that included the legendary Super Champ - one of the last and best amps to come off the old Fullerton line.

Over the years, Rivera's own constantly evolving designs have found favour in every musical genre from country to pop to death metal, resulting in a long and diverse artist list that includes some of the world's greatest players.

Yet despite the boutique credibility, modern Riveras are relatively affordable, especially since the introduction of the entry-level Pubster and Clubster series.

This year, however, Rivera has upped the ante a little with the introduction of a hot-rodded and more expensive version of its Clubster 45 amp, called the Clubster Royale.

The Royale sports the same retro-styled cabinet design first seen on the Venus range of amps. Consequently it's good looking with nice proportions, while capable of withstanding any abuse professional touring can dish out.

Thanks partly to two massive transformers it weighs in at roughly 23kg, which is about as heavy as we would want a 1 x 12 amp to be, yet still remains quite portable.

One main PCB holds most of the preamp, power amp and power supply components, including all the front panel controls. Smaller boards hold the FX loop circuitry, output valves and speaker and mains connections.

As you'd expect, the standard of layout and component quality is exceptionally high, with through-plating on the high-voltage PCBs and special chassis-mounted valve bases, which reduce heat transfer to the PCB and eliminate board flex. This greatly improves long-term reliability compared to amps that have valve bases directly soldered to the circuit board itself.

Other features include a regulated DC filament supply to keep noise to a minimum, while switching is done silently and smoothly by opto-isolators rather than relays: this is top stuff.

The lead channel controls include gain, master volume and a three-band EQ, while the rhythm channel is pared down to volume, treble and bass, with master controls for presence and reverb.

No Rivera is complete without a pull switch or two and the Clubster Royale has three, activating the lead channel's gain boost, a bright boost on the rhythm channel and channel switching if you don't want to use the supplied two-button footswitch.

The rear panel features Rivera's highly capable series effects loop with send and return level controls. This loop is a useful upgrade on the standard Clubster's insert points; it can interface with practically any effect, from a £20 fuzz box to a studio delay, and run any length of cable. Other rear panel features include a fixed level line out socket, impedance changer and a pair of speaker jacks.

Attention to detail is evident everywhere and the internal build quality is first class - this sample has been put together by someone who understands and appreciates high gain valve audio circuits.

Overall, it's an object example of how to do things properly; printed circuit board amp construction doesn't get better than this.

Although the front panel is unchanged, this is a significantly different design to the original Clubster. "The Clubster Royale has a three-tube preamp while the standard Clubster has two," Paul Rivera tells us, "and the topology [the circuit design and the way all the components interact] is very different.

"In this amp we're using a tube as the first input stage, whereas the standard Clubster uses a high voltage FET, so the tone is sweeter and the pick attack response has changed for the better. The distortion tone is also different and the amp has considerably more gain than the stock Clubster.

"Bottom-end-wise there's quite a thump in this amp; quite a bit more than the size would first indicate". That's a typical Rivera understatement - for a 1 x 12, the Royale's low frequency response is epic!

Moreover it's not flabby like some 'big-box' amps, but tight and focused, capable of punching through the chaotic audio of a live band almost like a stack. The 'Blackface'-influenced rhythm channel stays clean and sweet up to around five or six using regular output single-coils, and easily overpowers our drummer's large kit.

Pushed harder, there's a cool chime effect which then becomes more of a crunch, but for proper distortion the Royale's re-tuned lead channel is where it's all at, delivering awesome crunch tones at lower gain.

Wind it up, hit the boost and you've got insane levels of distortion, with harmonic squeals exploding off the pick, Billy Gibbons-style, but all without sacrificing any of the phenomenal punch. There's a definite British edge to this channel's precisely defined mid-range.

Played on its own it could be a little too aggressive and punchy for some, but use it live with a band and you'll quickly find that's what gives the Royale its ability to cut through. Because the amp is so responsive, the subtlety isn't lost; it just works at louder volume levels.

The reverb is big, spacious and warm, with a smooth decay and no distortion. The footswitch toggles the reverb and channel change functions but not the gain boost, which isn't actually that much of a drawback as the amp cleans up superbly using the guitar's volume control.

We think the Clubster Royale is a serious pro-standard amp that's ideal for any stage or studio environment. It's exceptionally versatile: that snappy rhythm channel has the balls and volume for killer country lead work, while you can roll off the treble and open up the reverb for some great smokey jazz effects.

The lead channel will cover anything from blues to classic rock to death metal; with so much depth to the tone you may never stop finding inspiration from it. As a halfway stepping stone between the standard Clubster and the more expensive two-channel models, we reckon Rivera has nailed it perfectly with the Royale.

The original Clubster earned its Gold Award partly on price - to be able to buy a Rivera in the UK for a grand was a breakthrough at that time. Despite tough trading conditions, Rivera's continuing commitment to the UK was recently underlined by a new purchasing arrangement that largely cancels out recent increases fuelled by poor exchange rates.

So right now, there's never been a better time to buy one of the most coveted of all boutique amp brands. There's some stiff competition out there that shouldn't be ignored in your quest for the ultimate combo, but most of it costs £200-£400 more, which makes this great little amp practically unbeatable.