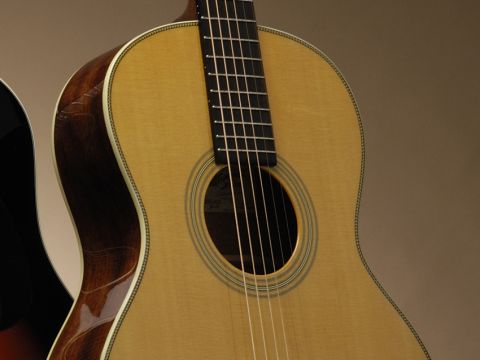 Recording King's ROS626 is part of the Century Studio Series, which is devoted exclusively to 12-fret, slot-head 000s. The guitar is clearly modelled on Martin's design especially popular during the '20s and early '30s, and it goes one step beyond the Vintage by having a wide fingerstyle neck.

Save for its mahogany (as opposed to rosewood) back and sides, the ROS-626 is a pretty close reworking of Martin's vintage 000-28.

Period detailing includes ivoroid body binding with herringbone top purfling, cross-diamond markers at the fifth, seventh and ninth frets only (supported by a full complement of side dots), an ebony, pyramid- ended bar bridge, a mosaic centre-strip down the back, and open-geared Grover Sta-Tite tuners mimicking the traditional Waverlys.

One minor departure is a saddle of normal length, in contrast to the original's 'long' variety. To help give the guitar an aged look, the (nicely cross-silked) Sitka spruce top is given an amber tinting prior to spraying. It's a subtly done effect and isn't too lurid either.

The 645mm-scale gloss- lacquered neck is one-piece mahogany,with a diamond volute under the peghead and a deepish, 'V'-shaped profile.

The span kicks off at a broad 47mm across the nut, and bridge string spacing is commensurately airy at just under 60mm.

All this may well deter some smaller- handed players, but it's a superb picker, needless to say, and a much less daunting handful in practice than the configuration would suggest.

The ROS-626 plays with plenty of folk-like verve and clarity, delivering a brightish, taut tone balanced by sufficient meat and warmth in the bottom end.

The dynamics feel and sound responsive and articulation is well balanced across the strings and sustain is readily forthcoming. It's an appealing blend for fingerstyle playing.

The standard of construction and presentation is commendably good, with very few cosmetic aspects that are below par. Indeed, taking its cue from the illustrious original upon which it's based, the trim and finery displays excellent taste and convey the vintage aura intended.

As for the sizeable neck: well, it goes with the territory, and you're either a fan or not.

Sound-wise, the guitar gives a good account of itself, and has the parlour-cum-folk genre well covered.