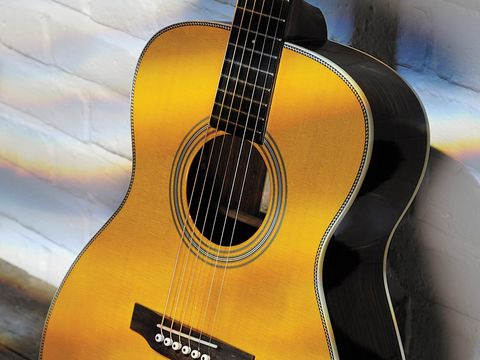 It plays like butter, sounds like a dream and looks so pretty that you'll probably carry a photo of it around in your wallet.

We all like to beat chords out of a big dreadnought or super jumbo size acoustic guitar, but they don't always deliver the goods when you want to drop your plectrum and switch to fingerpicking.

You might get bags of bass and a bit of treble or vice versa, and that's not ideal when you want each note to shine. That's where small-bodied acoustics come in.

As artists as diverse as country pioneer Jimmie Rodgers, current Brit folk favourites Mumford and Sons and Eric Clapton have discovered, smaller 'folk-size' acoustic guitars leave the big boys in the dust when it comes to pumping out a focused, well-balanced tone when you're playing fingerstyle.

The Recording King RO-127 boasts some quality tonewoods. For starters, there's the solid AA Grade sitka spruce top. That's a nice thing to see on any guitar's spec list. Add the ebony fingerboard and bridge, and the price doesn't seem much of a stretch at all.

The real story, though, is the solid East Indian rosewood that's used in the construction of the back and sides. This is a very high-spec guitar.

Mid-range guitars are often loaded with bling to disguise the fact that not much thought has gone into the tonal character of the instrument. Recording King offers the best of both worlds.

Vintage details such as the 'torch' inlay on the headstock face and the beautiful herringbone purfling that follows the guitar's top binding will have an 'open sesame' effect on your wallet or purse. No question. But this guitar is much more than a pretty face. It's the tone that makes it special.

Despite the marketing spiel and voodoo surrounding tonewoods, there's no guarantee that solid woods will provide a better tone than laminate timbers. It's the way a guitar is put together that counts.

In the Recording King's case, it's been assembled with attention to. The rosewood back and sides provide the RO- 127 with a mellow tone that's beautifully balanced across all six strings.

Strum a chord with a pick and each note rings out equally. Use your bare fingertips and the tone is as sweet as pie.

As its name suggests, the Recording King would work great in a recording studio. The tone is already there, you just have to stick a mic in the right place.

This is a guitar for singer-songwriters of any genre: country, blues, folk and so on. When a guitar sounds this good, all you really need is a decent voice to go with it.

When it comes to playability, the Recording King feels great. The shorter scale does make fretting and bending strings a touch easier, but there's not that much in it.

The action is set high enough for buzz-free performance and great tone, but it never compromises the joy of actually playing the thing. The V profile neck will fit your hand like a glove.

It should be obvious that the Recording King RO-127 has blown us away. The wow factor of the spec sheet has been beautifully realised in the finished guitar. The price tag is damn attractive, too