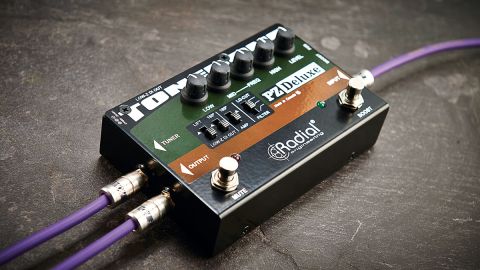 It's not cheap, but neither does it feel or sound it. An eminent road hog!

But while the PZ-Pre (£271) might be too feature-laden for many, the PZ-Deluxe strips it down to a more focused, single-input design, all housed in a smaller but weighty, bomb-proof rugged metal enclosure (145mm wide by 95mm deep and approximately 45mm tall) that won't take up too much space.

Think of the PZ-Deluxe as your control centre with input-conditioning features, tone shaping via three-band EQ with semi-parametric midrange, and jack outs for your stage amp, tuner and an XLR to take your signal to the PA.

Add in a mute switch for silent plugging in and unplugging of your guitars, plus a set-and-forget level boost with 13dB of gain, and you have pretty much all you need.

Input is a single jack. There's no LED input indicator and you can use the PBZ gain stage if you're using a passive piezo pickup via a simple side-mounted push switch. The boost level is a recessed control that you can set with a cross-head screwdriver, which won't get moved in transit.

Output level is controlled for both the XLR and jack amp outputs via the right-hand rotary control. To the left of that are four other rubbed-knobbed controls, which feel extremely tough, for low, mid, mid frequency and high.

In the centre of the preamp are four slide switches: ground lift; separate 180-degree phase inversion for both the DI and amp outputs; and, finally, a three-position Lo-Cut filter with flat, low-mid cut and low-cut positions.

Powered by an included 15-volt (400mA) external power supply, the PZ-Deluxe is one of those 'it does what it says on the tin' products.

Using a variety of low-to-high-end steel-and nylon-string guitars, we easily dialled in pretty much all we needed. As ever, you'll need to take care with setting levels to minimise any additional background hiss.

The mid-frequency range is very wide, so you might, for example, want to cut a more general midrange from your guitar's onboard preamp and use the PZ-Deluxe's midrange to dial out those trickier, more specific upper-mid or lower-mid points - quite often, two midrange cuts are needed, with the low end and high end more of a general character.

Nope, this is the sort of signal conditioning that should ensure your out-front and backline sound is maximised.

Think of this as a DI box with EQ - and one that you'll know, rather than whatever the venue has to offer (and they can be of highly varying quality!) - and you'll make friends with any sound person out there.

More expensive preamps like LR Baggs' Venue DI adds a second midrange band, plus a stage-friendly tuner, while Fishman's Platinum Pro is configured to work with guitar or bass, has compression and a highly visible tuner.

But if you don't need those bells and whistles, or you already have them, this will sit quite happily as a standalone unit or the 'brain' of an extensive acoustic pedalboard.