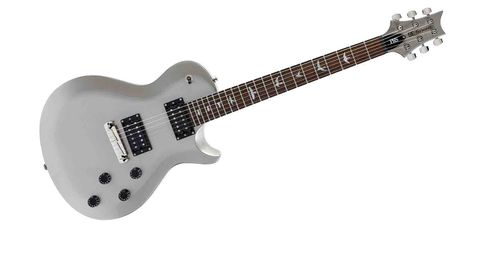 The SE Standard may have the versatility, but when the Tremonti Standard rocks hard, there's little in this price range that can touch it.

As the second artist to receive a PRS signature model (after Carlos Santana), Mark Tremonti has become an important ambassador for the brand, and the Tremonti SE's debut in 2003 bestowed an affordable weapon on guitarists of a heavier inclination.

The Tremonti Standard retains the key features of the SE model, with black binding around the Platinum-finished body and PRS SE Treble and Bass humbuckers.

With a finish like this, you're unlikely to be knocking out major 7ths, and the Tremonti puts out some serious meat.

Its clean tones are punchy, and lend themselves to the kind of extended chords Mark employs in Alter Bridge's quieter moments.

Kick in the distortion, and the bridge humbucker handles downtuned distorted riffs without any mud; there's enough presence to handle just about any kind of driven playing, and the hefty mid push gives powerchords real momentum.

There are no coil-splits (though the middle position gives you a taste of lower-output flavour), but this is a big rock guitar. That's reinforced by the Wide Fat neck shape, which is chunkier than the Pattern Regular, but with our model's low action, it retains a slinky playing feel for solos, especially with the considerate carve at the upper frets.