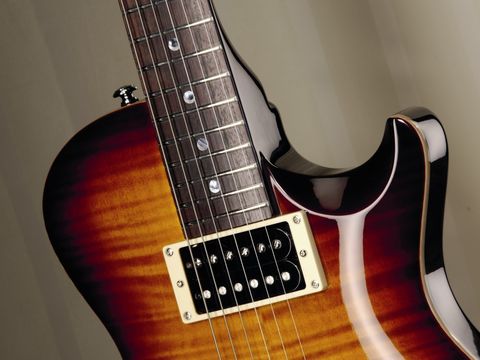 For the journeyman player needing both power and versatility the SE Singlecut is, for the money, simply superb.

PRS and Gibson's legal dispute over the similarity of the PRS Singlecut to the iconic Gibson Les Paul has dominated guitar news over the last couple of years.

And now that the USA Singlecut is back in production another battle is about to happen in the lower market area thanks to the release of the Korean-made Singlecut SE.

The third maple-topped SE so far, behind the SE Soapbar II Maple Top and the SE Custom, the SE Singlecut is the first SE to emulate PRS's fabled carved maple top.

Like the SE Custom, what we have here is a plain slab of maple topped with a nicely figured maple veneer that's primarily a flat top, but the generous edge chamfering is rounded to create - as on the existing Tremonti SE - a faux carved top.

It might not look as elegant as the carve on a USA Singlecut but at less than 25 per cent of the USA model's price that's acceptable.

And unlike the Tremonti SE, which has a plastic bound edge, here we get PRS's natural wood edge binding as on the SE Custom.

But the interesting thing about this guitar is that it isn't a direct copy of the USA model. Firstly, the overall body depth is a lot thinner - 45.5mm as opposed to the 57mm depth of the USA model - and more like a Custom depth, so the all important maple/mahogany ratio is therefore different to a real Singlecut.

Here the maple top is approx 13mm thick, leaving the mahogany back wood around 32mm thick as opposed to the 15/42mm maple/mahogany ratio of the Singlecut.

So from the off, this SE Singlecut is more like a single-cut Custom in terms of its apparent bulk. It has immediate impact on the feel. Not only is this sample a perfect 8lb weight, it feels more delicate than the bruiser-like Singlecut or, indeed, the Les Paul.

As with all SEs, the neck carve approximates the USA wide-fat profile but it is slightly slimmer in depth and, like the overall body, feels more delicate than the USA carve. Some will prefer it.

It still captures a slightly 'V'-d section and feels very good, irrelevant of any comparison. Fretting, from a slightly lower section wire than that used on the USA model, is very tidy, and even the fingerboard edges are slightly rounded to approximate the feel of the USA necks.

Another US feature are moon inlays (although they are not available on a USA Singlecut, it's either dots or birds) and where so many single-cut guitars in this price bracket go for a bound fingerboard this one is typically unbound: less complicated to make and better for it.

The rounded heel replicates the USA model, as do the slight ribcage contour and generous rear edge radius.

Inside the treble cutaway there's a very smooth line from the body into the neck - actually neater than this writer's USA model - and overall finishing is razor sharp, not obviously thicker than the USA process though presumably just polyester, not the polyester base coat/ acrylic top coat blend of the US model.

Continuing the elegant simplicity is the one-piece PRS designed Stop-Tail, which is nickel-plated and, again, close to the USA-made part.

The strap buttons are smaller, though still broad topped, and the output jack is mounted on a more generic football-style chromed metal plate.

Unlike the Kluson-style tuners of the USA-model, here we have the standard enclosed PRS logo'd tuners and nicely cut friction-reducing nut. Overall it's a very tidy, cleanly made instrument with a serious amount of PRS character.

Another major difference between this and the US model is the control layout that, unlike the Singlecut's four controls and shoulder-mounted toggle switch, goes for the standard PRS positioning and master volume (with treble bleed cap) and tone control configuration.

The pickups, open-coiled humbuckers with just B (bridge) and N (neck) stamped on the baseplates, are the same as those fitted throughout the SE range.

It's a lighter sound, less dense in the low end with a little more high-end sparkle. The pickups are less powerful than the USA No 7s but it's a quality, lively, quite resonant rock tone.

The bridge pickup has strong mid-range grunt without over dominating the tone; the neck pickup is darker, smoother but still with a clear edge.

The SE Singlecut is really expressive. The volume taper is smooth so reduced settings clean up the tone and the twin pickup mix, when used like this, creates a funky 'single-coil' sound - a good foil for the full volume blast of the 'buckers.

Overall the feel is lightweight and ergonomic; a great stage guitar and versatile with it.