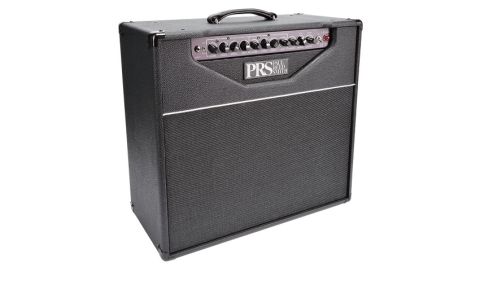 It's pricier than some of the competition in the mid-range amp market, and by limiting itself to classic rock and blues-style tones, it doesn't have the flexibility you'll find elsewhere, but it does what it sets out to do very well indeed.

PRS' SE range brought high quality guitars to the market at low prices, now it's doing the same with amps. Here we look at the new SE 50 Combo.

Paul Reed Smith's reputation isn't an accident. PRS Guitars has become one of the most desirable names in the game because it gives fans precisely what they want. In a nutshell, that's guitars and amplifiers that are as sophisticated as they are musical, at three distinct price points: Custom, pro and student.

The Student Edition (or SE) line is the latest and arguably most important addition to the company's line-up, putting PRS gear in the hands of players on a budget, yet without compromising build quality or that all-important PRS sexiness.

The brand hasn't been building amps for long, but when it officially launched its amp division in 2009, it followed the long-established PRS way of doing things with style, and the SE 50 looks to continue that tradition.

An all-valve combo with silver, black and claret livery and a single 12-inch speaker, the SE 50 is essentially a big brother to the previously reviewed PRS SE 30 combo, an expressive but straightforward tone machine.

The 50 is a rugged and reassuringly solid combo, built to take a beating and look good doing it, with an aesthetic that's utilitarian yet stylish. The same practical philosophy continues to the front panel, which keeps things simple: two channels, each with a three-band EQ and bright switch, plus reverb and master volume.

As with all noisy black boxes, the fun begins when you plug in. At low volume and with the bright switch off, the clean channel is full-bodied and graceful, especially with judicious application of reverb. Flick the bright switch and things step up a notch, with the channel breaking up no matter how gentle you are with the volume - it's perfect for vintage British-style distortions that will cut through any mix.

The lead channel is altogether filthier, yet not uncontrollably so. A little light knob twiddling produces a crunch so creamy and warm that you could can it and sell it as soup; it's great for rhythm riffing. With the bright switch engaged, the SE 50 is capable of producing a wealth of blues and rock-ready distortions that never cross the boundary into ear-piercing, retaining enough composure to keep the glasses from shattering.

It's perhaps a touch too conservative for some, with an output better suited to cultured, well-rounded tones than high-gain mayhem, but that's not necessarily a bad thing - not everyone's a shredder, after all.

The SE 50 is a bit of a dark horse - its sophisticated appearance means it'll pass muster in polite company, but it prefers things a little dirtier. The clean channel's keenness to fray around the edges into a textured snap, the lead channel's authoritative rock tones and the quality of the construction are exactly what you'd expect from PRS - all class.