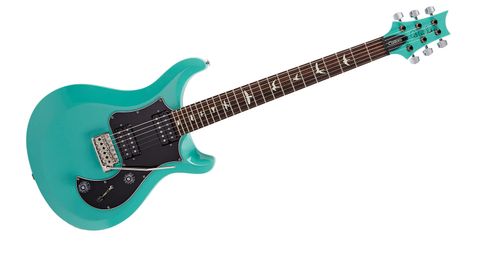 The Standard 24 would make a great workhorse for covers-band guitarists who need sonic versatility - or just about any player of any style.

Other than the solid-colour finish, pickguard-mounted electronics and missing maple top, the PRS S2 Standard is spec'd the same as the 'regular' S2 Custom 24, right down to the S2 locking tuners. And while it can't quite be considered affordable, the price quoted includes bird inlays; regular dots see the SRP drop by a significant amount.

As we've noted with past S2 models, it's hard to see where cost-cutting has taken place: there wasn't a spot of lacquer out of place on our review model, and while the Seafoam Green won't be to all tastes, there's no denying it's a sharp contrast to the PRSes of yore.

The playability, however, is universal: as with the 635mm (25-inch) scale length, the Gibson-meets-Fender Pattern Regular neck feels good in the hand.

You can't argue with the Standard 24's tones, either: the rounded neck humbucker works for everything from open chords to jazz vamping, while activating the coil-split brings in a cutting single-coil vibe.

The bridge humbucker has everything you need for distorted solos, with a weighty girth and sustain. The tones are a little darker than their maple-topped PRS brethren, but they're no less satisfying.

Throw in the middle-position coil-split funk, super-stable tuning and liquid-smooth vibrato, and you've got one very versatile instrument.