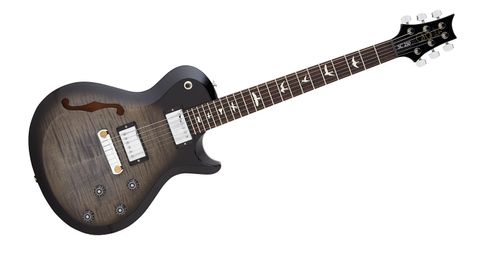 It's the most versatile sounding and has the largest cavity, but needs heavier strings to maximise its semi-ness.

In broad terms, this new semi-solid S2 version of PRS' long-serving Singlecut sticks closely to the all-solid version in both shape and specification. It ups the body depth to 50mm, and its cavity extends behind the bridge and into the cavity for the shoulder-placed toggle switch: the biggest cavity of all the new S2 Semi-Hollow models, since you've asked...

The back wood has the necessary routing and is then capped with centre-joined figured maple. The top piece, however, on the underside of the f-hole, is also routed so the top looks thinner than it is.

The f-hole is unbound, like the rest of the guitar, and unlike the maple-topped 'core line' guitars there is no natural maple edge. Finish-wise, the Singlecut has an opaque back, sides and neck back with a choice of translucent or 'burst tops.

Another feature of this guitar is the (subtly) reduced weight. The Singlecut is noticeably lighter than the previous solid version we've encountered, while the locking tuners, scale length, and either Stoptail are the same as the solid version.

You'll also find the same pickups as its solid brethen, with #7 covered humbuckers. The humbuckers themselves are USA-designed and made in Korea, while the Singlecut's Stoptail is the same part as on the USA guitars.

We've written plenty about how PRS believes unplated bridge posts, saddles and even tuner posts maximise vibration transfer, and it's the same here as on the core-line instruments.

Irrelevant of the sounds, it's important to remind ourselves just how well this guitars plays. The pattern regular neck shape feels chunky but not over-big; the fretting from a medium gauge, slightly wider than the core line guitar, is immaculate, like the set-up and intonation.

Using a diverse range of semis for reference, including a PRS SE Custom Semi-Hollow with P-90s, a Guild Starfire V with Bigsby and an all-mahogany PRS Singlecut Hollowbody, we set about a rather lengthy sound test. Here goes...

Unplugged, the Singlecut sounds wide, with an open midrange, but is it really much louder unplugged than a standard solidbody? Not much. It's perhaps no surprise that the Singlecut gives us a decent low end, and a semi-like tonality, although, it sounds a little underpowered to our ears.

It's interesting to compare semi with solid. Taking our 2001 Singlecut, the first thing you notice is the weight, and we're reminded of how good this lightweight S2 semi feels.

But the sound of the older Singlecut is different: it has a brutish musical power, more low end, more focus in the midrange - the pickups (original #7s) sound like two slightly brighter or darker versions of the same thing; the Semi-Hollow's have a broader contrast and there's a little more honk to the mids on the bridge pickup, the neck is a little more open in the midrange and the lower mids have a definite 'cloudiness'.

This semi has its own voice - although to generalise, and compared to our reference semis, it sits more in the classic and alt-rock genres, rather than old-school jazz and blues, where a little crunch and gain, combined with the small air chambers and the coil-splits, create some excellent, highly resonant and (if required), on-the-edge of feedback tones that seem both contemporary and timeless.

Then, of course, there's PRS's superb build, playability, intonation and tuning stability, and it's very gig-ready. But if we're honest, the sounds are a little less 'dialled in' than the solidbody S2, or indeed the majority of PRS's core-line instruments we've tested. That said, the Singlecut, to our ears, has a recognisable semi-like amp'd sound and is rather versatile.