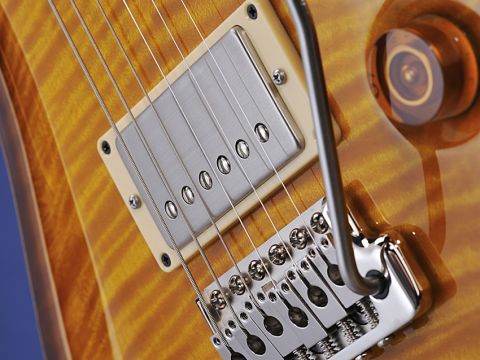 The subtle changes on this signature guitar have a profound effect on the result. The DGT may be the ultimate player's PRS.

Texan guitarist David Grissom was a prime mover in the development of the 1994 PRS McCarty model. After a decade of using McCartys, Grissom - who Paul Reed Smith has referred to as "my ears" - was well-placed to help in the genesis of an 'improved' model.

"Three or four years ago," remembers Grissom, "Paul and I started to discuss different possibilities. I felt that there were several things we could do with the guitar to make it better. Some of the things I was already doing on my own McCartys: different fretwire, pickups, changing the tuners.

"At the same time a lot of people, studio players, would play my main McCarty and say that they'd buy one if they could get one like mine. See, you can't get a McCarty with tremolo [an option dropped by PRS in 1999, aside from a very limited run in 2007] and I never stopped tinkering with my tone.

Outwardly, the DGT appears to be an archetypal PRS. But, as always, it's all about the details. Like the McCarty, the DGT's body is slightly thicker than a Custom's, while the 22-fret neck features a new DGT profile and bigger Dunlop 6100 fretwire.

"With bigger frets - they're not radically bigger just a little taller and wider - you can use bigger strings," says Grissom. This is the first PRS solidbody to ship with .011s.

And the neck? "It's somewhere in between a wide-fat and an old regular profile. We compared my '93 McCarty and my '87 Standard and shot for something in between as they are my favourite feeling guitars."

The DGT is the only standard PRS production model to be finished in nitro-cellulose, more specifically cellulose top coats over a very thin polyester basecoat. "It lets the guitar breathe more, gives a less plastic feel, and it does make a difference to the sound", reckons Grissom.

Even the tuners have been Grissom-ised: "I think they do have a tonal effect. They're the new Phase II locking tuners with the brass posts. Now, I'm not gonna sit there and A/B tuners day in and day out but Paul Smith has done that.

"I'm very much a traditionalist, in that I always feel that you've got to put Klusons on, but I'm really sold on these tuners. I'm not much of a one for locking things but this tuner is sonically a really good way to go.

"We also put ivoroid buttons on [PRS refers to these as "faux bone"]. Literally when I took the old ones off it felt like I had a pound in one hand and nothing in the other with the ivoroid, so that's a lot of weight we've taken off."

Once Grissom and Smith had the acoustic sound how they wanted it, the pair set about the pickups. "The pickups were built from the ground up. I spent over a year on pickups using a test guitar where we were able to change pickups in and out of the guitar in, literally, 15 seconds. So, we had a really accurate way of evaluating pickups.

"Paul probably built me 40 different pickups and at the same time we were A/B'ing them against all the available pickups and decided what sounded good and what didn't. We found so many interesting things, we got into consistency issues with some manufacturers.

"I have a sunburst 1959 ES-335 that has some really incredible sounding PAFs. In my experience PAFs all sound different but this was the one, really smoking, the benchmark. We found what you potted the pickup with makes a difference, between paraffin and beeswax, how much you pot the pickup, every little thing makes a difference."

More visibly, the DGT is the only PRS guitar with two volume controls and one master tone (which, via its pull/push switch, also operates the coil-splits).

It's more than clear that Grissom cares passionately about the guitar he's going to put his name too: "It's my name and reputation - I'd never put my name on something unless I was 100 per cent behind it. In fact I've just sold my number one goldtop McCarty (made for Robben Ford) that I've had for 14 years."

We warm up our test-bench amp with a 2007 maple-topped McCarty to put us in the expected ballpark. It has to be said this is one very fine guitar: vintage-like and open sounding with a great neck pickup - less brutal than a Singlecut with a tighter low end but, to our ears, a little sweeter and more toneful than a Custom 22.

Our sample's resonance and light weight add to the stew and remind us, frankly, how overlooked this guitar has become. Amped up, the Grissom takes us much further from the original McCarty than we'd imagined.

First off, it does feel very different - there's a stickiness to the neck that definitely feels more Nashville than Annapolis, and the combination of the chunkier wire and tougher strings not only creates more fight but seems to take the DGT on a slightly darker, smoother route.

It's like the McCarty has been to the gym and is now more powerful and muscular. In fact, the low end is a surprise too: it's much more single-cut-like in its ample depth. Yet there is plenty of openness to the sound - it's very vintage-like and the coil-splits are most useful and musical.

In fact, even through a clean Fender the DGT's coil splits sound really good. With both pickup volumes on full, the neck pickup does seem very slightly underpowered, but by knocking back the bridge volume a little, not only is the balance restored but you have a little sizzle in hand should you need it - a trick Grissom uses to great effect.

For Townshend-style big chords, the guitar sounds huge and that can't just be down to the string gauge. If you never use your volume or tone controls you'll be missing out here too. Unlike the original McCarty we have treble bleed caps on the dual volumes, which helps to retain clarity with reduced volume settings.

The more we play it, the more sounds we find and the combination of moving from the coil-splits through the full humbuckers (with volume reduction) then to the full-on tones make the Grissom one of the most powerfully expressive PRS guitars we've played.

For those players who love their old style tone but need more voices the PRS DGT is - we think - the pearl in an already impressive range.