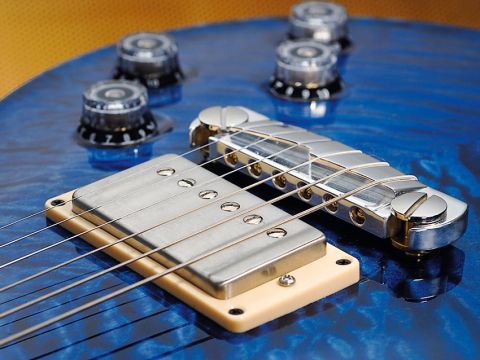 Another posh limited edition PRS, but one that closely nails the 'Holy Grail' PAF tone. Shame it's so expensive.

This limited SC 245 is part of a small 'no options' run announced at PRS's September 2008 Experience event. Only 250 of these guitars will be made (each has a signed and numbered rear control cavity cover) and it's joined by the same spec, old-style (passive) McCarty and Custom 24 of which 150 and 350 are being made respectively.

Just another loftily priced, posh PRS then? Well, yes, but that's not our specific interest here. Early in 2008 we heard rumours that Paul Reed Smith was working on yet another new pickup, designed to emulate the Holy Grail: Gibson's late fifties 'PAF' humbucker.

Of course, if we had a penny for everyone who's claimed they've nailed this exclusive recipe we'd probably be able to buy some originals (which currently fetch $2,000 plus apiece).

PRS is very guarded about its pickup specs - magnet type, wire gauge, etc - and while the new pickups' name, 1957/2008, tells us exactly what they're aiming for, Paul Reed Smith will not be drawn on specifics other than stating that the new pickups differ from, say, the 245 humbuckers.

This is because they use, "the same [coil] wire from the same machine with the same coating: the machine that made the wire for Gibson and Fender in the fifties is the machine that's making our wire." This resource is also, apparently, exclusive to PRS.

"But it ain't just wire, it's the magnets too," continues Smith. "I'm hanging the entire marketing hat on the wire but I'm hiding in the wide open, you know?" What Smith will allow us to say is that the material composition of the magnet used back then (Gibson reputedly used either Alnico II, III or IV) is not the same as is commonly used today.

"We have the old stuff being made again and it sounds exactly like the old stuff. It's the wire and the magnet and everything else. There is a magic to those old PAFs - that's why they cost a couple of thousand dollars each. So, basically, you're getting two pickups and a free guitar and case!" And will the pickups be available as retrofits? "No!"

Of course, you also get one very fine electric guitar, these more vintage-y pickups suiting the smaller-scaled SC 245 platform (as opposed to the full 25-inch scale, more modern rock SC 250).

Changes to the standard SC 245 include a 1957/2008 truss rod cover, the standard case has a white sprayed-on 1957/2008 stencil, clear 'lampshade' control knobs, a 10-grade quilt maple top, the back wood is spec'd for light weight (as well as being weight relived), a wide-fat Peruvian mahogany neck (a wood Joe Knaggs refers to as a dark, stable mahogany) is standard while the fingerboard is called Dalbergia rosewood.

Which is? "A really rare form of Asian rosewood that we get," says Smith. "Extraordinary material out of India that was blown down in monsoons, not plantation grown rosewood. It's almost black, yes? It's a very specific, rare kind of east Indian rosewood."

Although there's no nitro finish here, just the standard ultra thin polyester base coat with the new 'hard clear' acrylic top coats, a raft of changes that have permeated the line in the past 18 months include unplated brass post tuners, a harder (but still friction reducing) nut and an unplated aluminium Stop-Tail bridge, which has nickel-plated brass posts.

Here's a clip of the bridge pickup:

Comparing this writer's well-gigged and bashed 2001 Singlecut with this new model, it's like we have two guitars from different companies. The original Singlecut is weightier and there's little doubt that the more subtle constructional changes have created a much more zingy and lively acoustic ring.

Perceived as a jack-of-all-trades the original Singlecut morphed into the more vintage-y SC 245 and the harder rocking SC 250. The 245 humbuckers certainly nailed a more 'PAF-like' tone - rounder nosed, very 'elastic' sounding, expressive and dynamic - but these 1957/2008s are something else again.

They sound lower in output (although the much used, though erroneous, DC resistance doesn't tell us much - we've tested 245 pickups that have had both lower and higher resistance readings) but these have a sweeter toned almost single-coil like clarity, a smooth uncluttered and less 'pushy' mid-range with balanced clean lows.

There are no coil splits on this model (although the pickups do have the usual white split wire if you fancy a little DIY) but by pulling down the volume controls - smooth tapered, as ever - you'd swear you were listening to a single-coil guitar, albeit smoother, wider and less cutting than a Stratocaster. Once again the magic of a modern PRS, from a playing view point, becomes very evident: there's huge versatility from the volume controls alone.

With rich sounding cleans and plenty of classic early-seventies-era rock power we edge up the gain and the guitar retains its even clarity and punch. That said, a hotter midrange is certainly going to be what many are used to, but kick that in from a stompbox and you begin to wonder if there's any single-cut tone you can't get here - Peter Green to classic Slash and more.

At higher volumes and gains we experienced some mild microphony and shrill feedback from the bridge pickup, but this is a very resonant guitar (and Smith tells us that these pickups, like the originals, aren't heavily potted). But we're left with an undeniable conclusion.

The 245 pickups are very, very good but these just sound clearer, cleaner, less cloudy and even more musical. The bummer is that you'll have to shell out for a far from cheap new guitar to be able to experience this sound.

Here's the rub. PRS's Singlecut was a very good guitar. Then PRS brought out the SC 245/ SC 250 with more specific vintage/modern tonality. Add in a slew of seemingly minor constructional changes that have been implemented over the past two years and this limited SC 245, if your tonal desire lies on the more classic, vintage-y side of the tracks, scotches the lot.

It may be a guitar aimed at collectors, but it's the sweetest sounding, most musical SC from PRS to date. Time to start saving…