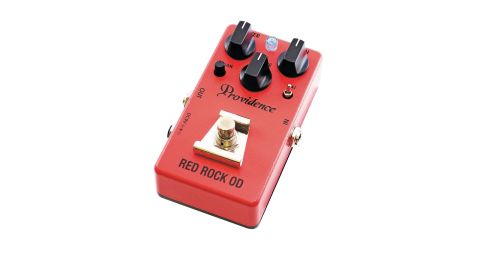 An ideal hotter companion to the boost pedal on your board, that can be tone-tweaked to complement your rig.

The Red Rock is billed as a US-voiced overdrive with tones as hot as 'the sizzling sun'. While this true-bypass pedal isn't quite as scorching as all that, there's typically thoughtful design from Providence here, starting with the circuitry that hops the 9V power supply up to 18V internally to provide extra headroom, plus a flexible suite of controls that includes a buffered boost at the input, adjustable via the volume dial.

The FAT switch proves useful for nudging our Telecaster towards Les Paul territory, for example, though we found it best used judiciously, as it does rob some of the penetration and bite from fatter pickups.

The volume control makes it possible to tailor the pedal's performance to suit a given guitar: for example, more input level from the volume and less outright dirt from the gain control helps humbuckers retain edge and clarity, while engaging the FAT switch and upping overall gain helps single coils sing.

This is a flexible, unashamedly 'coloured' overdrive, that's optimised for single-coil guitars, and it provides a welcome contrast to all the so-called 'transparent' drive pedals out there.

It's slightly more vintage than modern in its tonal character, and a little tweaking is required to get the best from it - but once you've got it dialled in, it's very capable indeed.