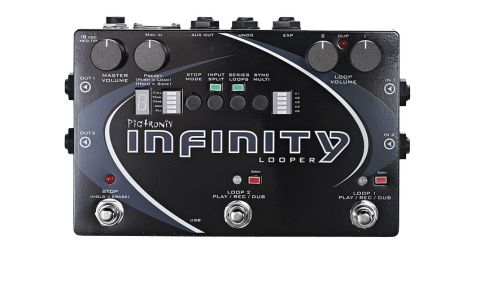 A 'board-friendly looper pedal with a set of practical features that make it ideal for guitar players who want to get into more involved looping.

If looping appeals to you, there's plenty of choice these days, starting from the no-brainer, plug-in-and-play simplicity of the TC Electronic Ditto Looper through to more complex machines capable of running multiple loops. The Infinity Looper from Pigtronix slots into the latter category, and offers two stereo loops that can be configured to work together in several ways.

There are two basic modes to configure how the pair of loops behave - they can be run in the normal parallel mode, where both can play together, or they can be set in a 'series' mode, where one starts as soon as the other stops - a great idea if you are using the unit for playing over verse/chorus song structures.

While it's reasonably sized to fit onto the average pedalboard, the Infinity Looper still manages to sport three footswitches wide enough apart to ensure that you won't hit the wrong one by mistake. Operation is straightforward enough: the two footswitches to the right have identical record, play and overdub functions - one for loop one, the other for loop two.

The footswitch to the far left stops the loops running and can also be used for erase functions, plus there's the option of connecting another footswitch for overdub, undo and redo. Each loop has independent volume control via a pair of knobs, and you can control overall volume by plugging in an expression pedal.

There is no onboard metronome to help your timing or a quantize function to fix mistimed loops, so you have to rely on your own sense of timing to get a glitch-free initial loop, but with practice, that can become second nature. Once your first loop is recorded, the second loop can be armed and will start recording at exactly the start time of the first.

It can be either the same length as the first or a multiple as set by Sync Multi, which offers plenty of flexibility - you don't have to fill the whole loop up with playing, so if loop one is, say, four bars long and you set the Sync Multi to x4, you can just play one simple phrase into loop two that will then appear every 16 bars. Overdubbing on either loop is straightforward, and you can build up loads of layers without noticing any loss of quality.

There are nine preset slots onboard to store your loops, along with control settings, and there's a USB connection, plus free software that lets you transfer loops to computer or upload digital audio files onto the looper. Ongoing firmware updates to add to the feature set will also be available via USB.

Pigtronix has obviously thought about how the looper is likely to be used, and included some very practical features, such as various modes that determine how a loop stops (stop dead, play to end, fade), and an aux output through which you can send looping audio to a separate destination from the main outputs - to a drummer's monitor, for example.

If you are using the looper in a hi-tech context with computer-based backing tracks, it will also take MIDI input to synchronise loop start and stop points with your DAW. In addition, two players can use the unit at the same time - an input split mode assigns input one to loop one and input two to loop two, for recording and overdubbing separate instruments on separate loops.

Some multi-loop loopers sport XLR inputs and the like, and are designed to appeal to a range of users. The Infinity Looper, however, with its pedalboard-friendly size and thoughtful features that help integrate it into various onstage scenarios, feels like a guitarist's machine through and through. Whether in front of an audience or at home on practice and compositional duties, it's intuitive to use and offers plenty of opportunity to get creative.