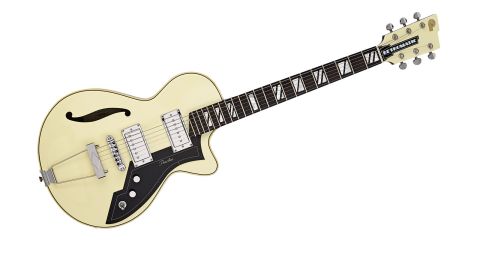 It plays nicely, too and of course, looks great: it's Retromatic!

As the Retromatic moniker would suggest, this new design from Peerless fits most player's dictionary definition of a retro guitar and, at first glance, seems to be as gloriously cheap 'n' cheerful as any American department store six-string.

Not a bit of it: the Retromatic may appear to have been forcibly removed from an art-deco Miami hotel front in the dead of night, but the spec and standard of construction is wholly 21st century.

We applaud Peerless for releasing it into a market currently dominated by seven- and eight-string metal machines, and defy anyone to play it without a silly grin spreading over their face.

The hollow acoustic body is fashioned from a maple laminate and finished, in this case, in black with a bound ivory top. The unusual three-ply scratchplate echoes the vibe of the stepped headstock, and the fingerboard, with its slanted cut at the 22nd fret, contributes to the vibe.

When played unplugged, there's sufficient volume to be heard either strummed or fingerpicked, and the tone is pleasantly mellow, a character that's translated to the amplified tone.

Loaded with chrome-covered pickups designed in the UK by Monty's, we especially like the soupy warmth from the neck P-90. Slathering on reverb and vintage delay, smooth jazzy licks and rockabilly ballads sound wonderful.

The bridge 'bucker is slightly brighter and more forthright, but is underpinned by the guitar's hollow honk.