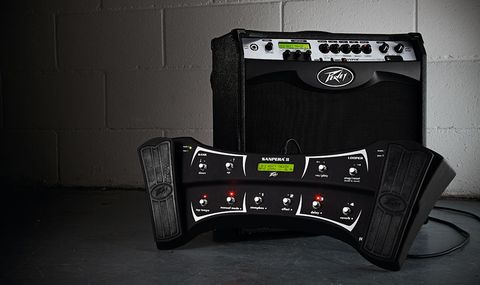 Instrument modelling in a guitar amp is a first - and that's just for starters. Don't pass up a chance to try it.

The digital revolution continues, and some of the latest guitar amp products pack in features and functions at prices that would have been unthinkable a mere decade ago. A typical example is Peavey's latest Vypyr VIP series, which features instrument modelling as well as the more common amp and effects modelling.

It debuted to wide acclaim at the 2013 Winter NAMM show and picked up numerous gongs, including the influential Best In Show 'Gotta Stock It' award. The series is now available in the UK and we're taking a look at the biggest of the new trio, the 100-watt VIP 3 combo.

The Vypyr is American-designed and manufactured in China. Its particle board cabinet houses an open-ended tray chassis containing separate printed circuit boards for the front panel controls, preamp electronics, output devices and switching power supply, all connected by ribbon cables.

The preamp board looks more like a computer product than a guitar amplifier, with tiny surface-mount components surrounding a large processor chip. The power supply board is single-sided; the rest of the PCBs are double-sided. The cabinet and chassis design keeps the weight down to a comfortable single-handed lift, despite the substantial Blue Marvel speaker.

At first glance the control panel appears clean and uncluttered, although the Vypyr VIP does a lot more than the controls suggest, making a coffee-break read of the manual mandatory...

VIP stands for Variable Instrument Preamp and the single input jack feeds a sophisticated circuit that's intended not just for electric guitars, but also acoustic and bass instruments. The Vypyr VIP is also the first amp we know of to feature instrument modelling alongside traditional amp models, with acoustic and bass guitar presets, as well as baritone, 12-string and seven-string models.

Amp models include a cool selection of Peavey and non-Peavey products that go from squeaky clean acoustic to maximum overload distortion, as well as various stompbox and rack effect models.

Your guitar, effects and amp model can be swiftly edited to taste and stored, using the amp's simple two-line LCD display and Peavey's clever WYSIWYG (what you see is what you get) interface. A ring of seven LEDs around each of the main control knobs instantly displays the setting for that parameter, changing position as each knob is turned.

It's actually a lot more accurate than it appears, with the LEDs progressively fading in and out over 24 steps from fully on to fully off. A non-programmable master volume sits next to a Power Sponge control, which lowers the output from full power down to just three watts for bedroom use.

Below these two are 3.5mm jack sockets for audio in and headphone out, plus a USB socket that allows connection to a computer for recording and editing the amp's features. Apart from two small cut-outs in the top corners for mains and Sanpera foot controller sockets, the rear panel is mostly hidden behind a particle board baffle. The overall impression is one of purposeful efficiency and power to spare for small to medium gigs.

The Vypyr VIP 3 powers on with a Vegas-style light show from the front panel LEDs, which thankfully disappears the instant a jack plug is inserted. We've got a variety of different guitars to try out the Vypyr with, including a Takamine EAN20C and a Squier Precision bass, to see how it handles the demands of acoustic and bass instruments.

The guitar models sound impressive in a mix, maybe less so when heard in isolation, but still impressive at this price bracket. The pitch shifting for baritone and bass is very stable and, for the most part, glitch-free. That said, there's a noticeable delay to the lower pitched sounds and the acoustic models lack a bit of realism.

The amp and effects models are excellent, delivering everything from fat vintage cleans with tremolo, to bluesy crunch and the obligatory endless sustain metal ballad tone with a 'kitchen sink' effects patch. The effects levels are generally overcooked, but easy to rein in for some very usable sounds.

The Vypyr's digitally controlled analogue preamp and TransTube technology work their magic to provide excellent overdrive effects that don't smother the guitar's character. The VIP 3 sounds just as impressive with acoustic and bass instruments - the powerful 100-watt output stage combines with the rear port for significant punch to low fundamentals, while the higher-pitched acoustic sounds are very usable despite the lack of a tweeter.

Direct recording with the USB socket works fine although that might depend on your DAW and audio interface. We had good success on our Windows 7 PC, the amp loaded itself as a generic USB audio device and ran happily off the Asio4all driver; with Garageband for Mac we ended up taking the audio from the 'phones output into a separate audio interface.

The one thing we weren't able to test was the Vypyr's editing software, which was receiving final tweaks at time of writing, but based on previous experience of Peavey software it's going to be up to the job. Overall the Vypyr dealt easily with a small pub gig and a commercial soundtrack recording, delivering great sounds with a minimum of fuss.

We can all lust after expensive boutique amps , but in the real world where time is money and audiences are impatient, they're often impractical one-trick ponies that are difficult to dial in at low volumes and lack versatility. To compensate, you might have to add an attenuator, two or three stompboxes and a rack full of outboards, connected up to a pedalboard with maybe a dozen audio and power leads. It's hardly a recipe for a stress-free performance.

So if you can have all that in one portable package that costs around the same as two good effects pedals, with the luxury of hitting a footswitch and consistently producing the same sounds gig after gig, surely it's a no-brainer?

The Vypyr VIP is a powerful tool for a very reasonable price that stands proud in a crowded and very competitive sector. Like rust, technology doesn't sleep; every so often the bar for programmable guitar amps is raised, and with the Vypyr VIP, Peavey has pushed everything up several notches.