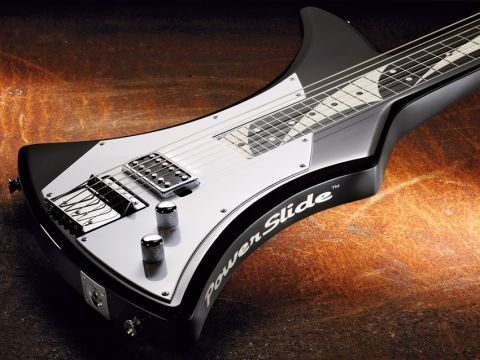 A well-made, affordable electric steel guitar with the option of playing it strapped on… if you can manage it!

The PowerSlide is an unusual beast. Let's face it, the electric lap steel guitar - which actually predated the 'Spanish' electric guitar - is hardly commonplace in terms of availability or the mainstream players that use 'em - Davids Gilmour and Lindley being notable exceptions.

Typically played on your lap - or on a stand - you don't fret anything, you just use a slide.

Classified as a 'square neck, raised action' instrument, Peavey's PowerSlide takes the basic solid body/neck (quoted as a neck-through construction) and adds an upper horn on the bass-side. The treble side is curved too, and to be honest it looks like some heavy metal monstrosity from the '80s.

That said, it's very tidily made: the 40mm basswood body/ neck achieves a good light weight, the finish is very smart and the graphic-printed 'fingerboard' has clear 'frets' and position markers.

But by design, the PowerSlide is intended not just to be played on your lap. Like the Melobar from yesteryear, the idea is that you can play it horizontally, on your lap or standing, or vertically (like a standard guitar).

This is done via it's four strap buttons (one at each tip of its base, one on the upper horn and one at the tip of the slotted headstock) and supplied three point 'Y' strap.

There's a chamfer on the treble side of the otherwise rectangular section neck that aids vertical playing although even seasoned slide players may find this a little, ahem, unusual to get to grips with. Trying to wrap your left hand around this square neck not to mention the huge string height is extremely odd.

We only get a single pickup, but it's a partially covered dual-coil ceramic- loaded design with a quoted DC resistance of 14k ohm. It's controlled by a single volume and single tone/variable coil cut control.

This latter feature works in reverse, so fully off (anti-clockwise) it voices the brightest tone: the humbucker's bridge-facing single-coil. As you wind the control up, the other coil is introduced so in the slightly stiff-feeling mid position you get the darker sounding full humbucker.

As you turn the control fully up, it takes out the high-end like a more conventional tone control.

We have no major complaints here. It's not perfect, but the combination of heavy strings, high action and a decent hollow Stevens-style bar gives you a big clean sound that's very satisfactory.

Country styles are easily coaxed with the tone control voicing the single-coil and heaps of clean reverb'd amp tone.

Conversely, dial-in a dirty amp tone and it's roots rock heaven, especially with that tone control voicing the full humbucker.

If you give it some higher gain, the treble roll-off really pushes out a nasty, nasally fat honking tone. It's got excellent sustain, while it also has just a little compression to the voice - not as much as a standard Bennett lap steel, which is simply a thicker, denser chunk of wood - but it's impressive nonetheless.

As to the different strap/playing potions… well, good luck! The strap initially seems a little short to play effectively horizontally and standing, but once sorted it does work.

While that cutout on the bass- side comfortably surrounds your hopefully-not-too-large stomach, it feels quite cramped, making higher position work much harder than simply playing it flat on your lap, a stand or a desktop.

In a conventional 'Spanish' playing position, using a regular bottleneck or slide, you loose the control you have in standard lap position and things such as behind-the-bar bends are impossible.

But you may disagree - the beauty of the slide guitar is that there are no rules in terms of style, tuning or sound - and taking the lap steel off your lap will certainly get you noticed.

As a standard electric lap steel, this is nicely made and, via the pickup and simple tone/ variable coil-split control, unleashes more than enough sounds to cover all the bases that you'll need - from country and swing through to blues and modern rock.

Whether you'll feel as comfortable strapping it on in either vertical or horizontal positions, as per its design, well… we didn't.

Via the strap and array of buttons it's perfectly possible, although your style - at least until you adjust, if you can - will be somewhat limited.

But, if the PowerSlide does nothing more than broaden the original electric guitar's appeal, it still gets our vote!

Now hear the Powerslide in action