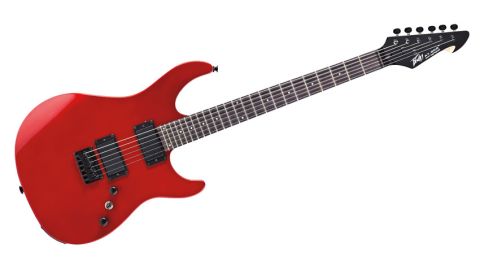 The AT-200 may prove revolutionary for certain players.

Up until this point, we've had guitars loaded with digitally created sounds and altered tunings, but when it comes to self-tuning, it's strangely something that's only been achieved in the analogue world. Now, thanks to Auto-Tune, the rules have changed...

Since it was launched earlier this year, there's been massive interest in this instrument: the first digital guitar to tune itself at the push of a knob. The technology used to achieve this has been developed by Antares.

You may recognise this name as the inventor of Auto-Tune, the 'professional pitch corrector' that has changed the way modern music is recorded and even performed. Antares has also partnered with Parker Guitars in the USA, but Peavey is the first company to approach us with a real, live guitar!

The guitar side of the AT-200 (our sample is a final prototype) is pretty bland: a generic modern rock guitar. Its basswood body has a small edge radius, ribcage and forearm contours and a very credible gloss finish. The satin-finished neck is equally efficient, with a mainstream width, slim depth (a little too slim for anyone who likes more retro styles), a far-from-vintage flat radius and medium jumbo, nicely fitted frets.

Truss rod access is behind the friction-reducing nut, while the modern six-a-side head houses adequate tuners and a couple of string trees for the top four strings. All the hardware is black-plated, including the six- saddle through-strung bridge, which also has small tracks for the saddle intonation screws to prevent sideways movement under tension.

The Peavey pickups are embedded in black plastic covers and look like active EMGs, but they're actually passive units controlled by a three-way toggle that's placed rather closely between the knurled metal volume and tone knobs.

The only aspects betraying its Auto-Tune superpowers are a green LED on the bass side of the neck pickup's surround, a large recessed rear cavity cover plate (the production version will be smaller), a small non-recessed battery compartment with flip-up lid, and a MIDI-in socket next to the output jack on the guitar's side.

Plug in, and with the tone control pulled up (passive mode) it's a standard modern dual-humbucker rock guitar with a perfectly usable thick, high-output tonality. Push that tone control down, however, and you enter the virtual world. The green LED on the pickup ring lights up and the thick rock tonality of the pickups changes to a digitally created sound that, on our prototype, is a lot lower in output and much more single-coil-like in its voicing.

If, like us, you tune up as a matter of course before you plug in, when you strum all six strings and push down on the tone control, not a lot seems to happen apart from the green LED flashing momentarily, followed by a very quick whirring while the Auto-Tune does its stuff. Regardless of whether the strings are anywhere near in tune, the sound we hear IS - perfectly.

To that end, we tried this process plugged into our Peterson Virtual Strobe tuner. We tuned up in passive mode and, on checking the 12th fret harmonic with the fretted note, noticed it produced some minor discrepancies and the Virtual Strobe's 'wheels' moved up and down.

In the active Auto-Tune mode it's unbelievably accurate: the tuning wheels come to just about a perfect halt, meaning the note is very in tune. Any 12th-fret intonation issues are gone; even at the 24th fret, all strings gave a perfect reading (with the exception of the sixth string past the 17th fret - though we're not sure we've ever played up there before). A G# on the third string first fret is perfectly in tune, likewise an F at the first fret on the sixth string.

All good? Well, while you can trick the AT-200 to produce drop tunings, you can't create raised tunings - although that will be possible with MIDI control via Antares' outboard software. Our prototype is far from satisfying in terms of its digital sound, but Peavey's Fred Poole tells us that's not what we'll hear on the final version.

Also, the more you drop the tuning, the more 'digital' the sound becomes, but it's worth noting there's virtually no latency - no delay between the real string pitch and the virtual pitch. Initially, bends seem unaffected, although a clean, precise playing technique is essential to ensure the most natural result.

While more obvious hammer-ons/pull-offs seem to be accurately represented, we do hear some limits to the technology. Classical-style vibrato (where your finger wobbles the string laterally) doesn't really induce any subtle pitch sharpening, which is confirmed with the Peterson tuner.

Likewise, if you execute a very slow (sideways) upward bend, the bend kicks in - very smoothly and subtly - after the actual pitch of the string moves upwards a couple of cents. This corrective window can, of course, work in your favour. While in the real world a tricky high-fret chord may have a couple of slightly sharp intervals, in this digital realm they sound very much in tune.

Whatever you think about the ethics of Auto-Tune and similar technologies such as Celemony's Melodyne, the ability to virtually correct pitch is part of modern mainstream recording and, increasingly, performance.

Many studio guitarists have told us that in country and pop sessions, you'd better be spot-on in tune, otherwise your playing might not make the record. So, it seems more than logical to apply this tuning system to an electric guitar, and the Peavey AT-200 proves scarily accurate, even if the real-world guitar is out of tune and intonated incorrectly.

The ability to instantly drop-tune will be a godsend for many players, too, not least those working on recordings where an altered tuning can add a different sonic dimension to tracked parts. Of course, because all this is done in the virtual world there's no issue with string tension, because the strings don't move.

Indeed, if you want a bit more 'fight', you can raise the real tuning, and therefore the tension, but the Auto-Tune will continue to make sure it comes back to standard pitch in the virtual world. A brave new technology? Bring it on.