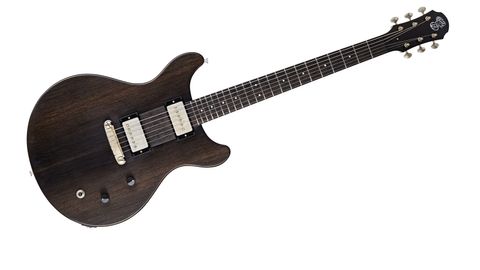 Once the great hope of the UK's production electric guitar industry, Patrick James Eggle reinvented himself as an acoustic maker par excellence. But now he's plugged back in and is crafting electrics anew.

A guitar maker's instruments don't always reflect the style of music they like, or indeed play. Patrick James Eggle - he of the Berlin, fabulous archtops and acoustics - admits to having a rock 'n' roll heart and, he tells us,

"The Macon is loosely based around my own guitar that I play out, a slightly over-sized Junior or Special. If I was a guitar collector I'd be going for those late 50s TV Juniors and Specials - I prefer the double-cuts.

"But I also wanted to build guitars that weren't over the top. Having said that, you know me, I'll probably make some with more exotic-looking tops. But I wanted it to be well built, look cool but not overly pretty."

In line with an increasing number of contemporary 'boutique' makers, PJE's Macon - available solely from World Guitars - comes in a low-gloss nitrocellulose finish and the back, sides and neck back are a semi-translucent primer-grey colour, aka 'Dirty Blonde', with aged metal parts.

The top, fingerboard and headstock facing are more unusual: bog oak excavated from the fenland basin of East Anglia, we're informed. Apparently, some 7,000 years ago a rise in sea levels flooded the fens and trees died standing then fell into the silt of the forest floor, where many have been anaerobically preserved.

Once excavated, the wood is slowly kiln-dried - a process that removes some three gallons of water per cubic foot - producing a very dense material.

Its black colouring is the result of a chemical reaction that occurs between the tannins in the oak and soluble irons present in the mineral subsoil. Bog oak excavated from the same area and depth as that used in this instrument has been carbon dated to 3,300BC.

It's not quite that long since Patrick last dabbled with the electric guitar - he made a few Zemaitis-style instruments for the USA market back in the late 90s - but the Macon signals a proper return.

"It's more than a toe in the water, it's definitely a foot, and I'm really enjoying building electrics again, a bit like being back on terra firma again."

We only have our trusty '57 single-cut Gibson Les Paul Junior to hand as a reference, but while the Macon initially felt a little bigger (expanded in outline by about 6mm), and with a different strapped-on hang, everything about it feels more 'tuned in'. The neck shape is dimensionally a little bigger, too, but thanks to a superior profile, more comfortable.

Tuning is very stable; intonation is excellent. As supplied, an over-low action gave a little too much buzz and zing, but the pre-intonated wrapover bridge allows easy height adjustment to raise the action and let the guitar ring a little more.

Plugged in after the iconic sound of the Junior's lone bridge P-90, so many guitars disappoint, but that's the thing about this Macon: it's not meant to be a Junior/Special clone, it has its own voice, and it's monstrous.

With some light gain and plenty of power amp, the bridge-placed Crawler humbucker nails a slightly cocked wah, Mick Ronson-like voice with midrange grind aplenty. There would have been many gigs back in the day when that was all this writer would need. But the Macon's not just for hoary old rockers.

Switching to a clean Peavey Delta Blues combo, pulling down the guitar's volume and knocking back the tone, the neck-placed humbucker-sized P-90 Mississippi Queen takes us right back to Kenny Burrell and Grant Green, albeit with less hollow-body 'bloom'.

But then select the mix and, although the Crawler dominates in full-coil mode for a slightly mid-heavy jangle, in split mode, combined with the neck pickup, it's certainly alt-rock-friendly and surprisingly Fender-like.

Roll back the tone a little and there's more Rickie character: crank the power amp up to bone-shakin' and smile - Mike Campbell or Johnny Marr could use this.

It certainly sounds like its construction: not 100 per cent solid. There's a whiff of semi here with spring and life that really works for those gritty but not over-laden sounds that are the Foo Fighters' bread and butter. Inspirational.

Patrick James Eggle may have been absent from the electric guitar market for a while, but this Macon is perfectly in tune with the modern boutique builder. The un-showy aesthetic mixes classic style with a chambered body and unusual wood choice to produce something different - far from a clone, yet dialled in to a very contemporary style that's rich, ringing with real rock 'n' roll roots.

By design, each one is unique, but custom orders can always be accommodated. No, it ain't cheap but neither is the build, sound or feel. Nice to have you back, Patrick!