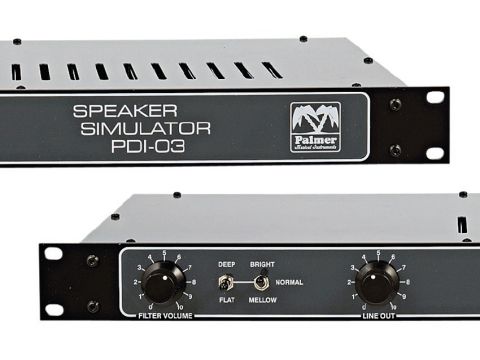 While computer-based amp simulation and POD-style hardware units are convenient to use and provide a huge range of sounds, there are still many guitarists who'd prefer to use their own amp for recording but can't use the traditional microphone-in-front-of-a-speaker-cab method because of lack of space or noise restrictions.

All is not lost, though, as a combined power soak and speaker simulator unit such as the Palmer PDI-03 can take a signal from an amp's speaker output and simulate the sound of a mic'd cab without damaging the amp.

The original Palmer Speaker Simulator first appeared on the scene in the late eighties and was an immediate success with some - Keith Richards and EVH were apparently keen users. This new PDI-03 is a re-issue of that original model, which hasn't been available for a while now.

It's a single-space rackmount unit that combines a signal splitter, DI box and power soak with an eight-ohm load circuit. Special filters within the PDI-03 are designed to provide carefully contoured equalisation to the amp signal, simulating the sound of a guitar amp through a cabinet.

Usable with or without a speaker cabinet, the signal is taken from your amp's speaker output into a rear jack and can be passed out unattenuated to a cab via an adjacent thru jack. A further four line out jacks, with output controlled from a front panel knob, are available on the rear panel to send an unfiltered (non speaker-emulated) signal to effects units or elsewhere.

The speaker-emulated signal exits either via a balanced XLR socket or an unbalanced jack and is tailored by three front panel controls: a volume knob and two three-way switches, which used together provide a range of speaker-emulated tones.

One offers variations on low-end tone - deep, which represents a 4 x 12 closed-back cab, and flat, a 2 x 12 open-backed combo-style speaker. The other offers high-end tonal variations with normal, mellow and bright options.

We used the PDI-03 first with a Fender combo - routing the amp's speaker output through it to the combo's speakers. The DI'd sound from the Palmer compares well to the combo speakers, producing a natural sound that accurately apes a close-mic'd cab.

Although there's no power attenuation for connected speakers, the PDI-03 could be used connected in line between amp and speakers and feeding the DI'd signal to the PA as a consistent alternative to mic'ing the cab.

While live use is a possibility, the PDI-03 really comes into its own for recording - and not just for doing things quietly. The sound of the PDI-03 speaker simulation could be a valid alternative choice in a studio with plenty of cabs and mics - one more colour on the palette with the switches giving you useful tonal variation, particularly in the top-end.

In an A/B test with a 20-year-old original, the tonal contouring of the new model is more extreme, but provides similar functionality - normal sounding pretty natural, mellow dulling the edges and bright adding top-end fizz. One thing to be aware of is that there isn't the 'air' that you might get when using a mic some distance from a cabinet - this sound is dry, but that's no bad thing as it gives you plenty of options for adding whatever ambience you want in the mix.

Interesting hybrid sounds can also be achieved by mixing the filtered sound with the sound from the line outputs - you could use all four of them in parallel, feeding different effects if you felt that way inclined - but the PDI-03's core strength is that it can provide a very natural recorded sound from a quality amp without a speaker in sight.

If you need to record electric guitar at levels that won't disturb the neighbours, or you simply don't have the facilities to mic up a cabinet, the PDI-03 will provide all you need to get your favourite amp sounds recorded with a sound that closely resembles a mic'd cab. A practical solution to a perennial problem...