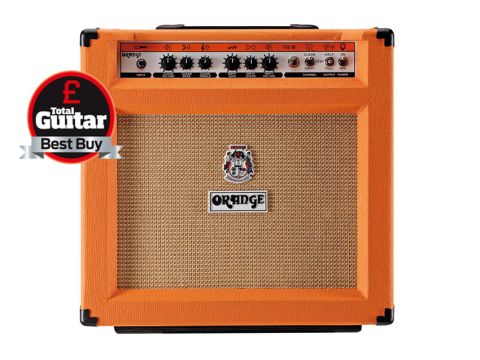 A portable beast with some fantastic clean, crunch and hard rock sounds.

Something's happening in the boardrooms of amp-builders everywhere. Years of chiropractic bills and hearing tests have taken their toll, spurring designers into coming up with smaller, quieter valve-driven amps that are still up to the rigours of today's gigging circuit.

Small valve amps are nothing new, but Orange has helped revive this idea over the last couple of years with its Tiny/Dual Terror and Rocker 30 models. Its latest offering, the TH30 (available as a head or combo) has important tweaks.

Orange's Damon Waller gives us the juicy details: "The idea was to deliver something on a similar playing field to the Rocker 30, but also deliver some extra features. It's got the same valve-driven effects loop as the Rockerverb 50 MKII, and a proper clean channel with EQ."

Sounds good for clean players, but what's in there for fans of Orange's heavier artists, like Slipknot and Gallows?

"We've also added an extra gain stage into the Dirty channel," says Damon, pleasing the gain freaks among us. "It's the dirtiest channel on any amp we have."

The amp is powered by four EL84 power valves and is switchable to 15 or seven watts for situations that require less headroom. The preamp contains four ECC83 valves, and there's an ECC81 on the effects loop.

Start with the clean channel in full power mode and you give the EL84s maximum headroom for the cleanest sounds. By adjusting the volume and output power settings of the amp, combined with your guitar's volume control, you'll unlock an extremely versatile set of tones, from clean to slightly driven sounds that work for indie/Americana, blues and classic rock while delivering the characteristic chime of EL84s.

Onto the Dirty channel and Orange ain't messing about. It's awash with tons of gain, and the Shape control sweeps the tone from a wide open, mid-rich rock sound to a tight, scooped modern metal voicing.

There's some blinding competition, granted, but the TH30, in its portable format, fills a different space. It would be a disservice to view it purely as a hard rock orientated amp; those EL84s provide sweet clean, crunch and distorted sounds. Some may be put off by the seemingly basic controls at first, but just wait 'til you plug in…