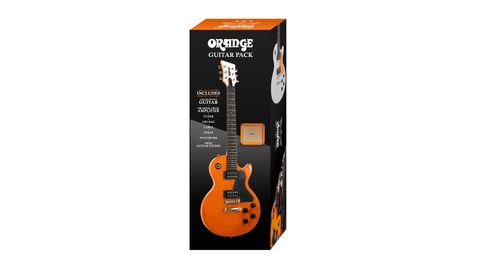 The ideal platform for learning to play. And the guitar could well last you past those first powerchords in the bedroom and onto your first solo on stage.

Legendary amp brand Orange turns its hand to guitars, tuners and just about everything else...

Aside from its amps' lively livery, Orange is known for its uncompromising approach to tone. Delving into the waters of guitar making and accessories is therefore not something it takes lightly, and the company's Guitar Pack should have budding guitarists excited: it includes everything a beginner needs to take their first steps in rock, including an Orange guitar, Crush PiX CR12L amp, gigbag, headstock tuner, cable, strap and picks.

There's no denying that the guitar looks the part, especially in the orange finish we have here, with the white headstock and amp-style control knobs in tow.

But while the guitar's body is made of nato - a wood with similar properties to mahogany but lower in cost - it retains the latter's weight, which inspires confidence.

It's a similarly robust playing experience - the guitar comes strung up with 0.010-gauge strings, which may not be the most forgiving for those first bends, but they retain tuning well.

The guitar is mostly well constructed, too - there are some rough fingerboard edges and the 'board itself is a little scratchy, but after a few hours of playing, you soon forget you're riffing on a budget guitar.

And although the pickups lack the presence and subtlety of those you'll find on pricier guitars, the humbuckers certainly aren't lacking in output.

There's a punchy roar from the bridge and toasty warmth from the neck, while the middle position provides a lower-output flavour.

The included Crush PiX CR12L combo's 12-watt output and six-inch speaker put out enough volume to annoy your parents/ significant other/housemates - although they may quickly encourage the use of the amp's headphone output.

The Crush will fit in nicely in your bedroom, too: it's one of the best-looking, not to mention well-constructed, practice amps we've seen in recent years, and comes with a three-band EQ, plus preamp overdrive and gain controls.

There's plenty of crystalline shimmer with the overdrive and gain turned down, and a decent garage-rock overdrive as you wind up the gain dial.

However, crank the overdrive and gain knobs, and the dirt starts to get rather fuzzy, so you'd best invest in a distortion pedal for those Metallica covers.

While we would have liked to see a built-in reverb to ease the pain of those first fumbled chords, all in all, the PiX offers a host of usable tones from an established brand.

We haven't even mentioned the extras! It's nice to see a decent cable and headstock tuner included with a guitar, and although the strap and gigbag may not last forever, they're enough to get you started.