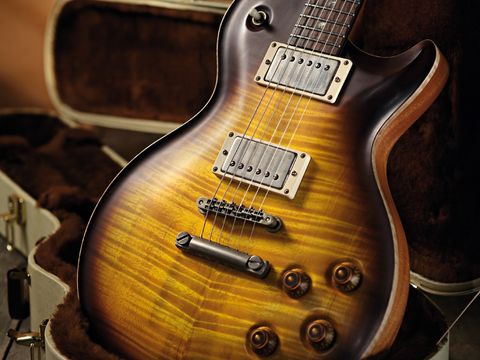 Social networking sites receive a bit of flak in certain quarters of modern society - they stand accused of, among other things, dumbing down our intellect, creating a culture of cynicism and even helping coordinate riots.

But we'd like it on record that they're not all bad. This review came about as a direct result of Nik Huber posting in-progress pictures of this and other Orcas on his Facebook page.

We saw them, thought they looked extremely cool, messaged Nik and in no time this tobacco sunburst model had made it from Frankfurt to Bath. And in finished form it's even more stunning than it was hanging in Herr Huber's spray booth!

Dark sunburst is one of the most fetching finishes of all. It's got a sinister edge, and yet it's somehow warm and inviting - autumnal, you could say.

In this semi-matt lacquer, and especially with aged hardware, it's even meaner looking.

Nik Huber's father taught him about wood, woodworking and the use of tools. When he left school, Nik took an apprenticeship as a cabinet maker.

But after a stint at a guitar building school in Spain he caught the bug, quit college and began building and repairing guitars full time. Today his small facility outside Frankfurt builds around 15 instruments a month, and the Orca is one of his most popular and long-standing models.

Of course there's no disguising its heritage. Similar in proportions to a PRS Singlecut, and therefore more svelte than a Gibson Les Paul, the Orca owes more to that guitar's outline and layout than to its Maryland rival. In fact it's very Les Paul-like, apart from a more hook-ish lower horn, shaped to provide better upper-fret access. Built from standard materials for this style - mahogany back and neck with figured maple cap - our Orca features an unbound Indian rosewood fingerboard with subtle abalone dot inlays.

Finished in semi-matte nitro-cellulose, and with dark nickel hardware that's been nicely aged, it's a truly handsome guitar that looks like it means business.

Pickups are low-output, PAF-style 1959s built by German guitar guru Harry Haussel and the switching and controls ape those of a Les Paul, save for a coil-split operated from the neck tone pot's push-push switch. Tuners are Gotoh 'Keystone'-style and the 'board nut is polished bone.

The Orca's main constructional feature is its extraordinary neck joint. While meeting the body at the usual 16th fret, turn the guitar over and you'll find a radically dressed away heel with a big chunk of wood removed.

Actually it reminds us of the stock carving on high-class German target rifles by Feinwerkbau, Weihrauch or Anschütz. Again, it's all about maximising top-end playability - notoriously compromised on traditional single-cutaway guitars such as the Les Paul.

The rest of the woodworking is just as well done, with typically European dishing on the front, a classy belly cut at the rear and tidily executed mahogany back plates.

Yet there's nothing about it that says, 'don't touch me' or heaven forbid, 'don't play me!' No, this is a working man's guitar, albeit with an aristocrat's price tag!

Weighing just over three kilos (7lbs) the Orca is a relative lightweight, but it boasts a titan of a neck that takes everyone by surprise until, unanimously, they fall under its spell. What a great piece of work: we can see Nik's love of Les Paul Juniors in this neck's depth and slight 'V' profile.

It fills the hand superbly and demands to be played. Fattening out slightly as it ascends, the extra girth is offset by the narrowing fret spaces for a feel that's pretty much perfect.

Think of any classic Les Paul solo and go for it - had there been a foldback monitor on hand, the collective foot would have been up in an instant! All the usual review playability clichés apply - bending, vibrato and so on - but with this guitar it's more about the place it puts you in, and that's usually centre stage, circa 1972, at the Albert Hall.

It so happened that on the day the Orca arrived, one of our music editors, a PRS Singlecut player and avowed tone nut, Jason Sidwell, was playing in a musical that was opening the same evening. Struck by his initial impressions he agreed to use it that night.

So in a departure from the usual Sounds section, here are Jason's thoughts on how it performed:

"Picking up a new guitar to use on literally a few hours notice might not be too wise, but thankfully it proved a really enjoyable experience. During our long opening number the tone was warm, compressed and dripping with good humbucker tone.

"For the second piece I switched to the neck pickup with overdrive for a killer Larry Carlton sound. Flipping to the bridge pickup for some riffing displayed the Orca's excellent balance, the top end opening up with a little more projection in the mid-range.

"Adding heavy distortion and short delay for the first set's closing stomper elicited a thick, organic drive. Sustain was superb, with the after-note bloom nodding to favourite drive tones from Mike Landau or Robben Ford, while slippery grace notes and bar-long sustaining high-fret bends were a lot of fun.

"The 'secret weapon' coil-split proved useful too. I had some funky licks and chords to play in the second set so selected both pickups split.

"There was an inevitable volume drop, but the tone had an appealing single-coil 'spank' with none of the 'excessive top end, shallow low end' compromise common with some split humbuckers. Overall it was a very enjoyable experience indeed."

Jason's thorough road test was done using an Egnater Rebel 30 combo and this reviewer's noodlings through a Two-Rock Jet confirm his thoughts completely.

Huber's elegant Orca has received high praise from several players on the team who don't usually go for boutique guitars. It's flashy in a weirdly understated way, but purposeful to the nth degree.

It's a guitar you know will do the business, but won't scream 'poseur' - and may actually be taken out and played!

Yes, it's silly money and one has to ask about resale values compared to Gibson and even PRS. But if you invest in an instrument like this you do so because you love it, want to make music with it - want to leave it to your kids. It's not an instrument that you'll sell on next year; it's for life.