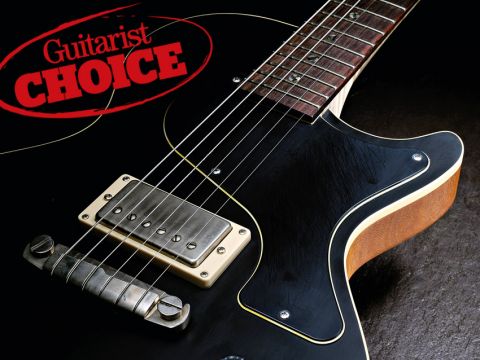 A beautifully made, great sounding slice of kick ass rock 'n' roll from one of Europe's finest boutique makers.

Having created an enviable reputation as one of Europe's finest boutique makers, in 2006 Nik Huber created the simplistic Junior, based on his Dolphin shape. For this year, however, he's chosen the more classic Huber Orca shape (not a million miles from the Les Paul Junior outline) for the Krautster - again with a slab body but also a slightly aged vibe.

The concept of both the Junior and the Krautster is straightforward: ditch the luxurious carved maple tops and fancy inlays for guitars that recall the simplicity and purity of old Juniors and Teles - for many the antithesis of the modern boutique builder.

Opening the case you'll either think someone's slipped you a pre-owned guitar, close it and run or, like us, be immediately taken by its charm.

"Believe it or not, I'm playing in a Foo Fighters tribute band," Nik Huber tells us from his Rodgau-based workshop in Germany.

"I was looking for a matching guitar. I am very much into Juniors but we already have a Dolphin-shaped Junior that's offered in korina and mahogany. This guitar was meant to be different from what we already have, so I wanted to leave off everything cosmetic and focus the design just on playability and sound."

It's a lightweight guitar and the build is immaculate: the body is a one-piece slab of light mahogany, 43mm thick (just slightly thinner than a vintage Junior) with a cream-bound top edge and radiused back edge, with a slight but comfortable belly cut on the back.

The face of the guitar is satin-finished while the back and sides are left natural with an open pore. "The neck, back and sides are just sprayed with three thin coats of satin finish," says Huber. "The top has a closed-pore finish, which is sanded and brushed - there's no buffing."

A major difference between this and the Huber Junior (or indeed the original Les Paul Junior) is the neck wood: where you'd perhaps expect mahogany we get flamed maple with a dirty blue/grey light wash stain and smoother satin finish that feels very thin; like it's been oiled and waxed.

"The first Krautster prototype had a mahogany neck and I liked it, but I was after more attack and some clearer tones, that's why we went with maple," explains Huber.

Material aside, the neck feels huge in the hand - 24.2mm at the first fret, 26.7mm at the 12th - yet extremely comfortable thanks to an excellent subtle 'V' back profile.

"We've been asked for bigger necks for the last few years - especially on the Orcas," says Huber. "I also love big necks myself and so we came up with this shape. It's not taken from another guitar, the Orca and the Krautster come standard with this shape."

This half of a maple tree is topped with a dark slab of East Indian rosewood with a compound radius and clean abalone dots - about the only bling on the guitar. Even the black painted headstock face has just a signature Nik Huber logo, while the serial number and model name are inked on the back of the head.

The neck is deep set into the body some way past the fingerboard end and that's covered, like on an original Junior, by a scratchplate that apes the style of the double-cut Les Paul Junior's scratchplate.

Huber's distinct, quite angular neck heel always looks uncomfortable but really isn't at all, and access to the uppermost 22nd fret is easy while the fretting is extremely tidy - the end of each fret tang is snipped off before it's fitted into the milled fret slots which, unlike a sawn slot, don't cut right across the fingerboard.

They stop at the sides so you can't see the fret tangs and it looks like a wood-bound fingerboard. Huber's Stoptail - which, with its fixed intonation ridge, is a very close cousin of PRS's Stop-Tail bridge - is made from aluminium and uses brass posts. But unlike a shiny PRS, the nickel plating is heavily aged and matches the nickel cover of the custom wound Häussel humbucker.

"It has an Alnico V magnet and is hotter than most of our pickups," states Huber. "The output is about 16k ohms but it reacts fine with the volume pot and is strong enough for a serious single-coil sound in coil-split mode." Coil-split is accessed via the pull/push switch on the lone volume control.

The guitar's acoustic resonance is superb, and different from an all-mahogany original Junior, with a very dry, loud and balanced response; a little bolder and firmer than the guitar on which it's based.

Plugged in, the humbucker sits nicely in the hot PAF world, detailed with a smooth top to the note that's sparkling and, when hit hard by the bridge, really quite explosive and a little more Fender perhaps.

Importantly there's a good taper to the volume, which with its treble bleed cap retains clarity at lower settings. Without a tone control, however, it's not as versatile as it could be - it's an option that we'd add.

But there's no denying the quality: a little bit of a more refined, more focused modern rock sound than an original P-90-loaded Junior we had here for comparison. The coil-split (which voices the screw coil) is lower powered, cleaner and brighter - as you'd expect - but works excellently as another voice, ideal to cut through a dense mix or add cut and articulation to gain laden riffs.

The neck feels superb, intonation is near-perfect and a lot better than an original Gibson Les Paul Junior, as is the tuning stability.

With its big neck, single pickup and volume control the Krautster is quite an uncompromising guitar. Yet it's quite liberating too: you just get on with playing and the sound remains raw, gutsy but with enough 'Fender' in the mix to give it added clarity and sparkle: its own voice. It's a great rock guitar that you just want to play. Loudly.