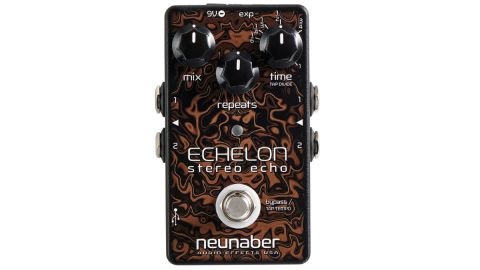 A very practical delay pedal that does its own thing with real character.

Capable of delay times from 50ms up to a whole second, the Echelon can be used in a normal mono guitar chain, but if you connect both outputs, the echo repeats alternate between the two in a 'golden ratio' ping-pong style - said to be chosen for its elegant accumulation of repeats.

The Mix, Repeats and Time knobs are pretty standard as for any delay, but the Time knob also functions to set the timing division if the pedal is in tap tempo mode.

While this is a digital delay, the sound of the repeats is designed for a more analogue feel: adding modulation and an EQ curve where high frequencies roll off with increased delay time results in a natural sound that sits well with your guitar tone.

Variations in the software editor include Scatter or Soft Scatter for the repeats, affecting their diffusion for a more sonically varied echo than just straight equidistant repeats.