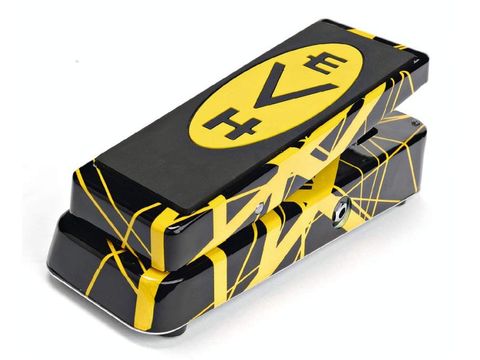 While the looks aren't to everyone's taste, this is a seriously impressive wah pedal that's well worth trying out.

It's not an effect that Mr Van Halen is particularly known for, but it's something he uses nevertheless.

Looking at EVH's own Cry Baby, customised in the early 90s with a High Q inductor and a wider frequency sweep to create a more 'vocal' sound, MXR designers found that Ed's extended use of that pedal in one area of its travel had physically altered the pot to make the mid-range even more defined and give a greater low-end sweep.

With these elements integrated into the signature model, the result is a pedal with a voice that defines what wah is all about. With a smooth sweep that seems to emphasise all the right frequencies and is capable of fat, chewy vocal-esque leads, it made our regular Cry Baby sound listless and anodyne in comparison.

Two bright blue LEDs easily let you see when the effect is active, but one concern is that the on/off switch under the treadle did not have as much resistance as our stock wah, making it a little too easy to inadvertently turn the effect off when getting a little heavy-footed on the old funk wacka wacka.

It's pricey but EVH fans will be tempted regardless. More conservative souls may find the graphics a little garish - all we'll say is don't look down and use your ears, because it sounds fantastic.