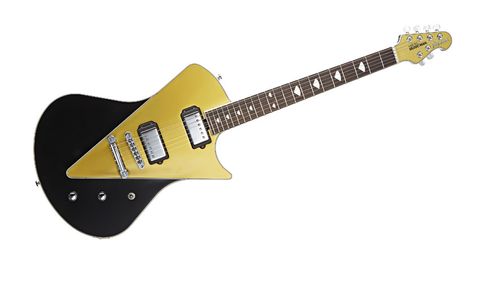 A boutique-level riff-rock machine guaranteed to stand out from the crowd.

Although the lion's share of the Music Man catalogue comprises instruments with relatively traditional double- and single-cutaway guitar outlines, the relentless heat of the Californian sun beating down on the brand's San Luis Obispo headquarters seems occasionally to result in a sharp left turn in its R&D department. Take the firm's brand new six-string, the Armada...

Although it's not quite as far out-there as the company's Bongo bass, for example, when the Armada was first unveiled earlier this year at the NAMM show in Anaheim, the instrument's unusual outline and its wedge-shaped maple top bamboozled as many onlookers as it delighted.

"People have told me that it reminds them of various cars, boats and, of course, pizza, pie and cheese, but none of these really were on my mind," laughs Music Man designer extraordinaire Dudley Gimpel when pressed for the source of the Armada's inspiration.

"The general retro vibe was somewhat inspired by vintage wristwatch designs, which I love, but there is no specific model that I was emulating."

The Armada - named after the Spanish and Portuguese word for a naval fleet, but more than a little evocative of retro sci-fi imagery to our eyes - began life about 18 months ago when Music Man sales manager Scott Ball asked Gimpel to sharpen his pencil and sketch out a new model.

"We discussed several key features, and his intention was to make it a two-humbucker guitar," Dudley explains.

"We've been experimenting with both set neck and neck-through prototypes for some time, and we agreed that it was time to offer a Music Man model with a neck-through design. He gave me free rein aesthetically to design my dream guitar. I sketched out three guitars, but this was easily the favourite.

"I wanted an elegant upscale persona, but performance was paramount," Dudley continues.

"The idea was to meld a retro vibe with a more contemporary body style. The bookmatched, figured maple top has become a classic feature of many guitars and is an important design element of the Armada, but it's not the whole story.

"Its carving and geometric shape are combined with the mahogany portion of the guitar to create a two-toned effect in contour, material and colour. The four-ply binding creates an attractive outline for all of these features, and the mother-of-pearl inlays continue the wedge motif through the fretboard."

Although the Armada is available in a variety of premium transparent finishes that show off those high-grade maple tops, our example's smart, opaque Black/Gold gloss polyester finish is the option we'd feel most comfortable taking on stage.

The guitar's aesthetic is polarising enough to spread on toast, for sure, but whether the Armada is an acquired taste or not (or indeed if we are suffering from six- string Stockholm syndrome), after spending some time in its company, it's definitely a grower. We can imagine plenty of hard rockers warming to its angular charms.

Armada in hand, one of the most immediately noticeable characteristics of this guitar is how well balanced and pleasingly chunky it feels. Although Music Man designs such as the Axis are prone to appearing almost comically compact when strapped onto a larger frame, this guitar is a bigger beast altogether, with an unmistakable debt to Gibson in its DNA.

"The neck is modelled after the iconic '59 shape, but provides complete access to all 22 frets," reveals Dudley. "Individual players often have varying tastes in neck shape, so no neck is perfect for everyone, but this is as universally revered as any neck shape ever."

Indeed, the '59 Les Paul-style profile is satisfyingly meaty and delivers a playing experience that suits classic riff-rock and bluesy lead much more so than technical shred or modern metal.

Still, it's a very different proposition to a nitrocellulose-finished Gibson neck, and the high-gloss polyester contributes to a contemporary but possibly a little more anonymous palmful than we'd hope for from a guitar with a price tag approaching three grand.

That said, the combination of neck-through-body construction and well chosen, high-quality hardware contribute to a wonderful natural sustain and resonance that begs to be coupled with a loud rock amp.

Plugged in, the twin humbucking pickups - "designed especially for the Armada and the product of exhaustive testing", says Dudley - are fat-sounding units with less air and high-end detail than Gibson Custom's current crop of PAF-alikes.

Although you can dial in convincing enough classic rock sounds, at both neck and bridge there's a girth and aggression here that really suits the heavy alternative styles and low down, dirty riffing of the likes of Soundgarden and Queens Of The Stone Age through to System Of A Down and beyond.

While it's difficult to imagine the Armada being the guitar that anyone rushes to for pristine clean duties, the twin-pickup mix has a useful dose of jangle when paired with a crunchy AC30-style amp tone.

It's great for complementing the kind of interesting inversions and ringing open strings beloved of Dave Grohl in the more MOR chapters of the Foo Fighters' back catalogue, for instance.

Set against the backdrop of a still-ailing global economy in which guitarists are more than ever forced to consider such sobering and anti-rock 'n' roll realities as resale value when they make a purchase, it's a brave company that births a brand-new shape with a bold visual identity and slaps a price tag of nearly £3,000 on it.

That said, Music Man is a hugely respected brand and the Armada is a very good, superbly made instrument that could handle a pro tour comfortably straight out of the case.

If you are looking for a rock-friendly single-cut in this price range, you'd have to really love the Armada's looks to pick it over a Gibson or PRS. But we'd be willing to bet that this guitar has enough personality to engender a cult following, especially if one finds its way into the hands of a high-profile player.