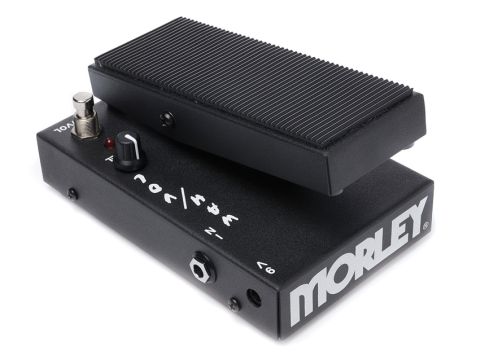 At this price, it may struggle to wow your attention away from larger pedals, but if a crowded pedalboard is compromising your tone then the two-in-one format and dinky design tick all the boxes.

Pedal fiends will be all too familiar with the fight for space that takes place on their pedalboards. And that big slab of wah pedal is a particular issue.
"When played with singlecoils, you get a fluid wah sound."

Step up Morley's Mini Wah Volume. It offers the same features as Morley's Power Wah Volume, but this dual-purpose pedal is around 25 per cent smaller than its older brother.

Switching between the effects is easy: hit the stomp switch and the light tells you you're in wah mode; hit it again and you're back to volume. Because of its smaller size, you need to be accurate when stomping (especially so for the large of hoof).

To turn the wah off, park the footplate towards the toe-down position, otherwise you won't hear anything when you enter volume mode, which is less than ideal mid-gig. Still, that short footplate travels further than you might think.

Clean, it's smooth in both modes (likely because Morley's wahs contain a light-based sensor, thus avoiding the crackle and wear-and-tear associated with pots), and when played with singlecoils you get a fluid wah sound.

There's a definite step in the sound towards the middle of the sweep when you apply distortion, but playing with the Level control smooths this out.