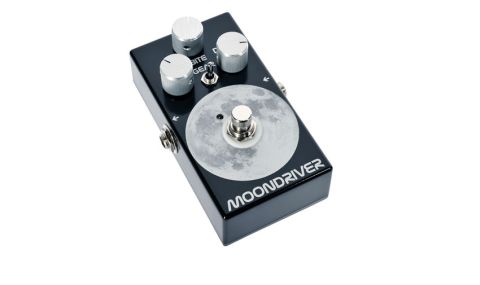 While much of the overdrive world obsesses about the Ibanez Tube Screamer lineage and its JRC 4558 op amp, there remains a grittier evolutionary line with the LM308-equipped ProCo RAT as its granddaddy.

"If overdrives are too smooth for you, distortions too metal and fuzzes too, well, fuzzy, try this"

The UK-made Moondriver doesn't mention the rodent directly in its marketing spiel, but the circuit and spec hints at an obvious influence.

The 'gear' switch offers three modes. All the way up, two silicon diodes are doing the clipping, returning anything from cleanish break-up through to very smooth distortion. At maximum gain, it's dark and pretty much into fuzz territory in the way it squashes and loses note definition. There's plenty of range in the tone pot (bite) to give you lots of cutting high-end frequencies back.

The middle position clips only half of the waveform, meaning less distortion and more level - it sounds superb into an overdriven amp. If you love the sound of guitar and amp but want 'more', this is for you.

The final position is a sort of mix of the two - edgier than the first, but with more gain than the second. There's more midrange and again it can compress and squash like fuzz at maximum: more aggressive, more punk/garage rock, but still fat enough for rock and blues.

If overdrives are too smooth for you, distortions too metal and fuzzes too, well, fuzzy, try this: out of this world.