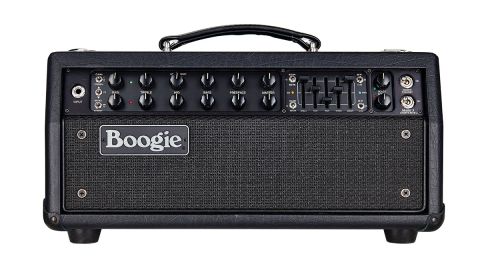 If you've been waiting for the perfect blend of Boogie tone and Mark V features, the 35 has your name on it.

Created by company founder Randall Smith in the late-1960s, at a time when all self-respecting guitar slingers aspired to play through a stack the size of a Volkswagen Camper Van, the original Boogie combo has evolved considerably from its Princeton roots.

The current Mark Five has over four decades of research and development behind it, andis one of the most coveted of all backline amplifiers.

Recently, Mesa has expanded the range with a choice of output stages, adding a 25-watt EL84-powered head that has proved so popular there's now another new model, with four EL84s instead of two: the Mark Five: 35.

Based on the same chassis and cabinet dimensions as other Boogie amps, the Mark Five: 35 head and combo are identical in terms of features - the only difference is the cabinet size.

The electronics live inside a fan-cooled aluminium chassis, with most components sat on three high-quality printed circuit boards. While earlier Boogie PCBs were hand-designed and laid out by Randall Smith himself, the Mark Five: 35's layout is generated by CAD, probably due to the increased component density.

Nevertheless, you can still see some of the quirks that date back to the early Mark II and Mark I eras. There's a lot of switching going on; we counted no less than 22 relays. The control layout is similar to that of the Mark Five: 25, but with a few extras.

There are two entirely separate channels, with gain, bass, mid and treble, master volume and presence knobs. Both channels have three very different voice options. The upper channel's choices are Clean, Crunch and Fat, while the lower deck is where the high-gain sounds live, with MK IV, MK IIC+ and Xtreme, referencing classic and modern Boogie lead sounds.

The famous Boogie five-band graphic EQ can be pre-set to on, off or auto, and both channels enjoy Mesa's Multi-Watt power option, offering a choice of 10 watts, 25 watts or 35 watts, and a footswitchable Solo volume control per channel.

The head exudes quality from every angle. Typically high standards of Mesa design and craftsmanship mean the Mark Five: 35 will look good and stand up to years of road use at any level.

The Boogie's smooth-acting tone controls have a wide range, making it easy to find a sweet spot for practically any guitar. The mid control has a much-extended range, with settings above five acting more like a mid-boost.

The lower gain settings on the upper channel sound superb. Clean is a very sweet 'blackface'-inspired tone with lots of headroom and sounds great with pedals.

Fat pushes up the midrange for subtle drive tones with a very touch-sensitive bite, while Crunch adds more gain for a gutsy, powerful drive sound that cleans up well with the guitar's volume control yet retains plenty of drive and sustain for solos.

The lead voices on the lower channel add even more gain: MK IV does a good job of emulating the rounder midrange punch of the classic Boogie lead sound, while MK IIC+ faithfully reproduces the edgier scream of the late-80s Mark Series, which has become the most sought after for modern rock soloing.

This voice would satisfy any gain fiend, but the final Xtreme voice really pushes things over the edge, with a blistering, fast attack, tight bass and razor-sharp treble. All the sounds are highly usable, the only black mark being a noticeable 'pop' when switching channels.

The famous five-band graphic EQ can be pre-set to either or both channels or activated from the footswitch, while both channels also have three power-output settings, with a choice of 10, 25 or 35 watts, making it easy to mix preamp gain with power amp drive.

The reverb is smooth, with a long decay that enhances sustained notes, while the refined CabClone direct output makes direct-to-desk connections child's play, either live or in the studio, as well as powering the headphone output.

While the flagship Mark V is truly astounding, it's a complex beast. The Mark Five: 35 is easier to use, without sacrificing anything tonally. The extra power over the 25 adds headroom to properly define its exquisite clean tones, with all the punch and cut you need for a great solo sound, and like all Boogies, it's relatively portable.

Mesa hasn't always had great success with its EL84 designs, but the recent Mark Five: 25 and Recto-Verb Twenty-Five scored consecutive bullseyes in every respect, as does the Mark Five: 35. The sounds are stunning: it performs almost perfectly and is built to last forever.

Of course, such excellence doesn't come cheap and at nearly two grand, justifyingthe cost to significant others may not be easy. However, where there's a will, there's usually a way.