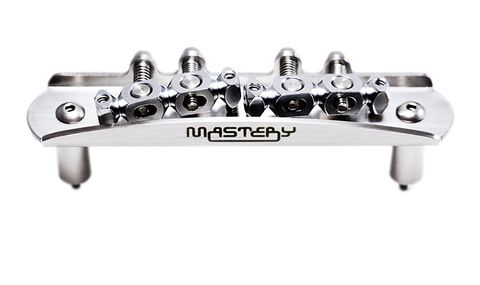 If you are having problems with a Fender Jaguar or Jazzmaster bridge, this could solve them.

Fender's original design for the Jaguar and Jazzmaster bridge left a bit to be desired for many players. Rather than just one groove for the string to sit in, the saddles had multiple shallow grooves, allowing a string to jump out of its slot, even with moderate pick attack.

Many players sorted the problem by using parts from a Mustang, but now there's a new solution, the Mastery Bridge - which also deals with other problems, such as buzzes and rattles.

Fitting the Mastery Bridge is easy: its mounting posts slot straight into the two original recessed thimbles, although the company sells replacements if you prefer.

Vertical adjustment of bridge and saddles is carried out by supplied Allen keys, as is movement of the bridge saddles backwards and forwards - four intonation screws are used rather than six, but this doesn't compromise tuning and ensures that no string catches on an intonation screw.

Extremely well-engineered, the Mastery Bridge improves things in several ways. Snug fit in the mounting posts means that there's better transfer of energy from string to body and, no matter how hard you play, the strings remain in their grooves. What's more, the brass saddles are plated in hard chrome, for less friction and smoother string movement when using the vibrato arm.

For improving playability, sound and maintenance on a Jaguar or Jazzmaster (or the other guitars that are catered for), replacing your stock bridge with a Mastery Bridge is a no-brainer.