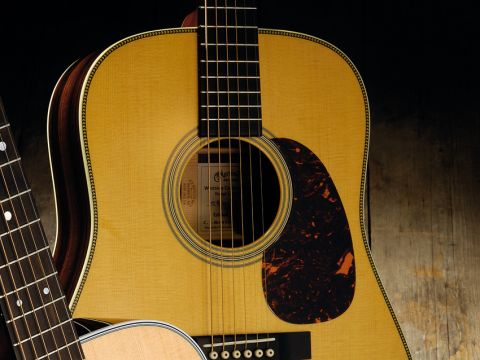 A superior deluxe dread with much more to offer than simply being part of a collection.

Westside Distribution was appointed as Martin Guitars' UK distributor in 2003. Far from being merely a box-shifter, Westside works closely with Martin in a relationship more resembling a partnership and, as a result, recent years have seen Westside launch special UK-only artist models.

In the beginning of 2010, Westside and Martin began discussions about a special range of guitars to augment the current production range, the majority of which would come through Martin's custom shop.

This was the result of feedback from enthusiasts and retailers who, along with Westside, wanted to satisfy the often uttered phrase, "this is a great guitar, but I wish it had…"

Martin production guitars serve as the foundation for the new models, but Westside is keen to stress the purpose, thought and effort driving each example. "Nothing is for the sake of it, or simply because we can," Westside told us.

One of the trickiest problems confronting the project was naming each model. Using the alphabet would obviously cause confusion when arriving at D, M and O. Numbers were also out of the question for similar reasons. To complicate the issue, Martin operates a strict policy stating that only guitars issuing from its official production run can bear the legendary Martin codes, any non-production guitars must be designated as 'Custom'.

So, with Martin's blessing and agreement, Roman numerals were seen as the best way forward for what would be called the 'Westside Custom Edition' guitars.

Every model bears an internal custom label, with the custom shop models having been personally signed by company CEO, CF Martin.

Further models are currently in production and expected to be in shops by the end of the summer though as yet, no details have been supplied as to what they will be like.

The Style X is very much a traditional guitar that draws on Martin's rich heritage. The foundation model for this is unmistakably the HD-28V, delivering appointments found in highly favoured pre-war Martins, including 8mm (5/16-inch) scalloped, forward- shifted bracing, herringbone inlay and parquetry on the guitar's back.

The Style X is an all-solid guitar that features a Sitka spruce, bookmatched soundboard and East Indian rosewood back and sides. In what is an additional touch of class, Westside has spec'd a Delmar polished and bevelled pickguard.

As Martin has often acknowledged, the HD28V's modified 'V' neck isn't to everyone's taste and Westside has taken this onboard, giving the Style X a modified low oval neck profile that gives the guitar a familiar, more mainstream feel.

The mature look of the Style X is largely due to Martin's use of an aging toner. The company typically uses one of three finishes: a regular clear finish, a dark vintage toner, and this aging toner, which falls somewhere between the two.

While this is no doubt a matter of personal taste, we like it. In terms of dimensions, the Style X is very much a 'standard' dreadnought with one subtle exception. Rather than the traditional 42.9mm (1 11/16-inch) fingerboard width, the Style X is fitted with a wider 44.5 (1 3/4-inch) 'board. Though a modest increase, the more generous spacing is noticeable.

Westside also offers the Style IX, which is essentially the same guitar but with a 42.9mm fingerboard width.

It's hard not to be impressed with the Style X. Subtle changes set it apart from a HD-28V but it remains a fine example of Martin's ability to create pre-war style guitars. The Style X comes with a black Geib deluxe vintage hard case.

Pre-war dreadnoughts have a unique voice that some would claim is the ultimate dread tone. Be that as it may, the Style X offers a modern twist on that Holy Grail, offering a smooth, silky output akin to that of a softly-strummed 12-string.

The bass is tighter than expected while the top end offers a clarity and dryness only found on the finest of instruments. The Style X is a particularly responsive guitar, which obediently and instantly reacts to the slightest variation in right-hand dynamics.

The guitar's sustain is as good as it gets and we find ourselves playing minimally to allow the Style X's richness to mushroom into the room.

The additional string spacing makes fingerpicking easier and turns this dread into an all-rounder. Indeed, the aforementioned nuances of the guitar's timbre suit delicate fingerstyle down to the ground.

It feels almost irreverent to do it, but giving the guitar a good spanking with a hard pick does reveals a limit to the Style X's ability to maintain the lush overtones and we'd suggest that this particular guitar prefers to be asked rather than told. In truth, it would be an unappreciative player who saw this as an issue.

Some sceptics might ask if these 13 models are necessary considering the extensive range of Martins already on offer. We'd argue that they do have a place in today's market.

The alterations and tweaks to 'regular' models are viable modifications and each has a justifiable purpose for being made. Yes, less expensive comparable Martins are available, but they don't come sporting a custom shop label.

Westside should find that these custom editions will be popular, not least because they're only available in the UK and provide Martin enthusiasts with the opportunity of owning a really unique piece of the company's production.