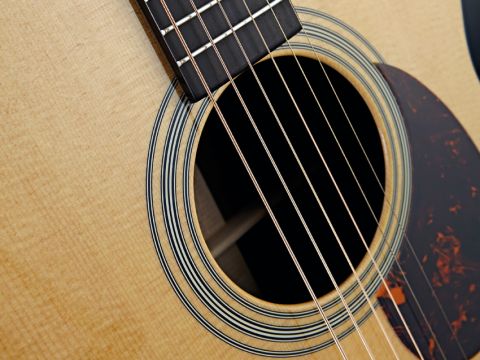 Martin's position in the acoustic world is built on the success and longevity of its core models, which are industry standards in every respect.

The OM-21 certainly falls into that category, but perhaps none more so than the classic D-18. Of course, Martin dreadnoughts are yardsticks in their own right, but the D-18 is a benchmark for all dreads.

Yes, there are more expensive ones available; with more decorative embellishments and exotic tonewoods. But because of its depth, balance and clarity, not to mention its ability to 'boom' and 'whisper', the D-18 is the dreadnought against which all others are measured. But what happens when its makers decide to 'update' such a well-loved model? Standing on thin ice, or the brave route forward?

There are both internal and external detail changes to the D-18. Standard 'X' bracing was used on the old D-18 whereas forward-shifted, 'X' scalloping is used here.

This means that the bracing material is gently carved along its length, which maintains strength and rigidity, but also improves the flexibility and therefore the top's propensity to vibrate.

External changes include an upgraded Delmar tortoiseshell polished and bevelled pickguard, which previously was black. We now have butterbean open-geared tuners instead of chrome enclosed types, an ebony fingerboard and bridge (instead of rosewood), plain black bridge pins - previously these were black with white dots - and an old-style Martin headstock decal that replaces the previous gold-foil type.

Interestingly for a dreadnought, the nut width has been slightly increased too, from 42.86mm to 44.45mm.

This 'imperfection' certainly has no detrimental effect on the guitar's rigidity or its performance, but in a retail setting some may pass over it due to its lack of uniformity.

A further difference between the new D-18s and their predecessors is aging toner. A number of Martin models now feature this 'aged' finish, designed to give a 'pre-war' look.

It does tend to divide opinion, some preferring the natural blonde hue of the spruce, others finding it somewhat anaemic. It's obviously a matter of personal taste, but we like it - particularly set against the rich, black ebony fingerboard and 1930s-style bridge.

The D-18's back and sides are formed from solid mahogany, the two-piece back being divided by a simple black Boltaron pinstripe. Both the D-18's back and front are bound with tortoiseshell effect binding, which matches the pickguard.

The soundboard binding is augmented with uncomplicated black and white coloured Boltaron coachlining.

With the exception of abalone fretboard markers and the unchanged Style 18 soundhole rosette, the D-18 has no further decorative features or embellishments. That said, it remains a pretty guitar, one that oozes style and a sense of acoustic royalty.

The satin finished, one-piece mahogany neck is fitted to the body utilising a dovetail joint and the fit and craftsmanship is first rate. In fact, every joint, line and fixing is superbly finished; Martin's typical high standards of presentation are equalled, if not bettered here.

Martin aficionados may be aware of the D-18P and D-28P; dreadnoughts from the Standard series fitted with 'Performance' necks (hence
the 'P') emanating from the
all-conquering Performing Artist series.

The all-new neck features a parallel profile with a slimmer taper. The result is a super-slim, super-fast neck, which has proved to be very popular.

The Martin dreadnought tone is well-known and has been written about endlessly. We compared our review model to a 10-year-old D-18 that has benefited from regular playing.

As you'd expect, the older guitar has a warmer, softer, mellower output, but in every other way the new D-18 outperforms its older brother. What is perhaps most noticeable is how much more responsive the new D-18 is - it feels more 'alive' than its predecessor.

No doubt due to the scalloped bracing and freer soundboard, we find our review model behaves more like a finely tuned race engine, reacting speedily with precision and to the slightest change in dynamics. The overall tonal output is crisp yet smooth, powerful yet controlled.

Whether gently played fingerstyle or thrashed with a heavy pick, the D-18 offers a balanced, well-rounded timbre with bags of headroom and sustain. Martin's revisions have come together to take the D-18 to another level.

It was back in 1992 that Martin bowed to requests from fingerstyle players and added the OM-21 as a stock model.

Though somewhat plain and unassuming, the OM-21 had two important features that fingerstyle players had demanded; the wider 44.45mm (1.75-inch) nut width and scalloped top bracing. Despite being a rosewood-bodied model, the lack of expensive decorative features kept the price of the OM-21 below that of a D-18.

Only two years after its introduction, the OM-21 was the top-selling non-dreadnought in the Martin range. Its appeal continues to this day.

Another key revision is the installation of Martin's new Performance neck, featuring a parallel profile with a slimmer taper. The result is a super-slim, super-fast neck, which has proved to be very popular - although the previous OM-21 did have a 44.45mm nut width so, in real terms, only the modified neck profile and taper are new.

Our review model is constructed with a solid Sitka spruce top and solid East Indian rosewood back and sides. Both back and front are book-matched and are first-rate selections - particularly the two-piece back, which is rich and luxuriant in appearance.

The ebony fingerboard is home to 20 superbly finished frets and the out of the box set-up is excellent. It's a breeze to play, though it would seem Martin feels this should only be done seated, given the absence of strap buttons.

As usual, with our OM-21 review model, Martin achieves very high standards of build quality and presentation. Look as we may, there's nothing to complain about - the best we could come up with would be a preference for the plain black bridge pins rather than those with white discs… but that's it!

Like its predecessor, the OM-21 is an uncluttered, uncomplicated, 'no frills' guitar, which rightly relies on its build quality, high-quality materials and tone for its appeal.

For someone familiar with the Martin OM sound the updated OM-21 will feel like home - but that's not to say the guitar lacks anything.

There's good reason why Martin's OMs are so loved; they sound fantastic. The lower registers have that familiar plumpness, the top end has a bell-like clarity and the separation throughout the tonal spectrum is excellent.

Lovers of Martin's OM guitars will be on familiar ground here and this reviewer for one is glad the tone hasn't been 'fixed' - it wasn't broken in the first place.

We reckon that the success and popularity of the Performing Artist neck profile is what has prompted Martin's decision to update and revise two established Standard series guitars. In so doing, they've taken the opportunity to fine tune the D-18 and it's so much better for it - surprisingly so. In fact, we'd offer a word of warning for current D-18 owners; try the new models at your peril - you'll want one. Post-tweaks, the OM-21 sounds much the same as it did before, but we'd suggest that's a good thing. Both guitars are superbly made, beautifully presented and, when you compare their competitors' equivalent models, are actually good value for money - either of these could easily be a friend for life.