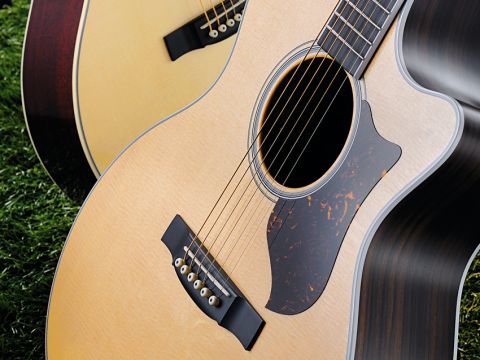 For its versatility, playability and performance this is our new favourite electro.

Martin has been making guitars now for more than 175 years - well before anyone ever considered plugging one in. Yet the release of new models within the Performing Artist Series of electros gives evidence of its desire to look to the future rather than back at its past.

Launched at Winter NAMM 2010, the GPCPA1 was generally well received. But its price tag of £3,200 made what was a desirable guitar unattainable for the majority of those that would arguably make best use of its F1 Aura 'sound reinforcement' electro system.

The GPCPA2 followed shortly after, and featured a three-piece rosewood back, but was priced at equally wince- inducing levels.

However, by reducing the use of expensive materials and simplifying the design, the third generation of Performing Artist Series guitars prove more affordable.

Our review model boasts clean, crisp visuals with little to complicate what is a simple, unfussy design. Some would argue that at first glance the guitar looks like a Taylor, and we'd find it hard to disagree.

The guitar measures just less than 16 inches across its lower bout and is a shade under 20 inches tall, putting the model in Grand Auditorium territory - slightly wider and taller than a Martin OM's 15-inch-wide, 19.4-inch-long body.

All Performing Artist Series guitars sport a new signature pickguard design that, again, looks very 'Taylor' at first glance. We like the shape, and the choice of tortoiseshell suits the guitar.

As is increasingly common with Martin, new materials have been used instead of endangered traditional woods. Black Richlite, a composite also found in worktops, is used for the bridge and fingerboard, while another less new and widely used composite, white Corian, has been used for the nut. Graph Tech's Tusq, the bone/ivory substitute, is used for the saddle.

While employing the familiar mortise and tenon bolted neck joint, Martin has designed a new neck shape for the Performing Artist Series.

Described by its creators as the 'Performing Artist profile' the one piece, satin-finished necks are a shallow 'C', which doesn't thicken until after the 10th fret - it feels mega-comfortable, slick and super-fast.

We also find the string spacing to be a great compromise between the needs of flat- and fingerpickers alike. The nut measures 45mm, widening to 54mm at the 12th fret and 57mm at the bridge. We'd suggest that this 'hybrid' string spacing would particularly suit a player who enjoys genre-hopping.

The guitar features a Venetian cutaway, which is fractionally deeper than that seen on Martin OM cutaways and thus provides further access to the upper registers.

The integrated battery compartment is found at the base of the guitar with the input jack sitting within it. It's therefore impossible to change the battery while plugged in.

Adjacent is the strap button, which has been positioned off-centre, towards the top of the guitar. This cleverly pulls the guitar in towards the body and makes playing while standing more comfortable, with the guitar feeling more stable.

As previously mentioned, however, should you be unlucky enough for the battery to go flat on you while the guitar is hanging on its strap mid-gig, then you're going to have problems…

The F1 isn't Fishman's first foray into the world of digital modelling (or 'sound imaging' as it prefers), but it does represent a significant step forward in terms of the functionality available within one unit.

In its simplest form, the F1 is a blend system mixing the signal from the undersaddle pickup with one of nine preset images. These images are the result of recording a GPCPA1 with one of nine world-class, high-fidelity microphones. The amount of blend is adjustable, as is the ability to alter the EQ for both the pickup and mic image.

The F1 also features a variable-level compressor, a tuner (which works whether the guitar is plugged in or not) and a 'search and destroy' anti- feedback system. The guitar's signal can also be switched between in and out of phase.

In what must be viewed as a considerable achievement for Fishman, the F1 requires just two rotaries and a simple LED. That's right; the tuner, blend, compressor, automatic anti-feedback and mic modelling are all accessed and adjusted with just two knobs.

Granted, the rotaries have three different operations; turn, press and press 'n' hold, but it's an impressively minimalist control panel.

By way of comparison Fishman's own Ellipse Aura, as fitted to a Martin OMC28, offers less functionality and sounds but uses three switches, two sliders, one push-button and a rotary!

As you'd expect with so much on offer from so few controls, the F1 takes a lot of getting used to in terms of its menus and adjustment possibilities.

In the early stages of the test we became frustrated at how easy it was to turn the wrong knob, or turn the right knob the wrong way, and seemingly wipe out any progress made.

On occasion, the feeling is akin to accidentally closing a document before saving the changes. In reality, this wasn't the case, but it's noteworthy that the 'restore factory settings' facility is an uncomplicated procedure and users can bypass the second level menu with a 'tune up, turn up', plug-in-and-go option.

The LED screen measures just 16mm in diameter and in most applications it works well, but we found its position a little awkward when using the tuner.

With the guitar in the normal playing position we found it difficult to see all three tuning indicators simultaneously. Remedying this requires dropping the headstock to such a low angle it makes retuning an uncomfortable stretch.

These minor niggles aside, we grew to love the F1. Just as when becoming accustomed to a new mobile phone or other gadget, familiarity and ease of use come with time and practice.

In some ways, the F1's design is a brave move by Fishman and, by extension, Martin too. On trial, the initial hours can be confusing, frustrating and complicated. Prospective buyers in guitar shops could easily give up and hand the guitar back. We'd suggest this would be a mistake.

Our advice would be to hang in there; the rewards are just around the corner, next to patience and diligence.

Martin has also launched a brand-new website solely for the Performing Artist Series that features instructional videos and guides.

The GPCPA3 is an all-solid guitar; solid Sitka spruce for the top and East Indian rosewood for the sides and two-piece back. The back and front are bound with white Boltaron, as is the fingerboard. The triple- line black and white coachlining match the simple soundhole rosette.

While the GPCPA3 is a modest guitar, aesthetically speaking, it's no plain Jane. The clean lines of this new body shape, along with the new shapes for the bridge and pickguard, make for a guitar that's both eye-catching and appealing in appearance.

A peek at the guitar's innards reveals the hybrid scalloped 'X' bracing. As you'd expect for a £2,100 Martin, everything is super-clean and tidy in here.

It almost feels superfluous to say, but Martin's general build quality and finish remains truly top-drawer and it's great to see the company maintain such high levels of quality control and craftsmanship.

Unplugged, the GPCPA3 does nothing less than astound. We half-expected tone to be a casualty of the cost-cutting sacrifices, but we couldn't have been more wrong.

The GPCPA3 is possibly the most versatile electro we've had our mitts on. From softly strummed chords to choppy riff-work, the GPCPA3 offers a plump, rich timbre full of character and warm overtones.

Slightly more aggressive playing opens the door to more snap but, try as we may, it was hard to overdrive this guitar. Fingerstyle players will enjoy the clarity offered across the dynamic spectrum.

Responsive, balanced, pulsating and with bags of soul, it's hard to justifiably want more from an acoustic. Simply inspiring.

Employing the F1 is equally impressive. As you can imagine, extensive experimentation is required to get the best from the onboard intelligence. Perhaps the most impressive aspect to the F1's capabilities lies in being able to shape the EQ for both the pickup and the selected image.

On offer are a wide range of variations that would suit recording and live settings alike. The compressor works very well and manages to tame even the most 'enthusiastic' player.

Another plus is the ability to 'destroy' any feedback virtually mid-song. Pressing and holding down both buttons engages the automated system and within no more than a couple of seconds feedback is nuked.

All in all, the F1's output is clear, versatile and it does an impressive job in capturing the soul of the GPCPA3.

Martin must be congratulated for this superb guitar. Build quality is high, acoustic tone is compelling and the onboard electronics first-class. Some will initially struggle with getting the desired settings out of the F1, but for those who persevere the rewards are great.

Perhaps what's most impressive about these guitars is that although designed as class-leading electros, they don't forget the need to serve as great acoustics as well.