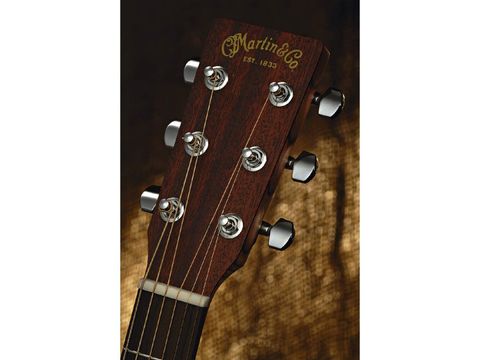 Good value and a powerhouse performance.

You can't put a price on the kudos of owning a Martin acoustic. By contrast, the DX1 is listed at £529, making it the cheapest member of the laminate-built X-Series to feature a solid wood top.
It lacks an onboard preamp which might be a deal-breaker if you're looking for a convenient live weapon.

Beyond that though, a scan of the timbers, hardware and measurements reveals that virtually all the spec of it's big brother, the DCX1E, has transferred to its cut-price sibling, along with a comparable level of build quality.

The body might have the colour and grain of mahogany but don't be fooled, it's made of HPL (High Pressure Laminate) an environmentally friendly new material that Martin claims offers the similar tone for greatly reduced cost. The neck is a similar affair - made of natural Stratabond with a rust finish.

As for the trimmings, we have a Corian nut, Tusq saddle and chrome tuners and thankfully the iffy visuals from the DCX1E are absent.

In its place we have simple dot inlays and a boltaron rosette. This looks much better in our opinion - more like a traditional Martin.

Given that, it's no real surprise that the DX1 offers comparable physical performance, swamping you a little with a deep body, but handing back valuable control with a palm-filling oval profile and fast-playing 'board.

It might not be a traditional dread, but you'll use it for traditional dread styles - punchy fingerstyle and commanding chord work - albeit with your solos being cut short due to the lack of cutaway.

It's both ridiculous and inevitable that the £529 DX1 will be judged against natural acoustics higher up the Martin product line. If you're expecting D-28 tone, you'll be disappointed - after all, that's a photograph of mahogany, not the real thing.

And yet, at the same time, this guitar gets closer to textbook Martin tone than it has any right to; chucking out the volume, offering a strong mix of tight top and authoritative warmth.
It bolsters licks with bags of sustain and resonance and is definitely good enough to justify the hassle of a mic for recording.

"It's Martin's intention to be prepared for the eventuality that traditional tonewoods will become harder to find and prohibitively expensive," reads the company's eco-statement in 2008, "and to educate the public as to the viability of alternatives."

If that's the aim, then mission accomplished. The DX1 might not quite match the class of a top-end Martin, but it gets far, far closer than you'd think.

If you can shake off the psychological hang-ups and open your ears, you'll find that this 'revolutionary' guitar is true to the original Martin values of quality, character and tone. Ultimately, you shouldn't knock them until you've tried them…