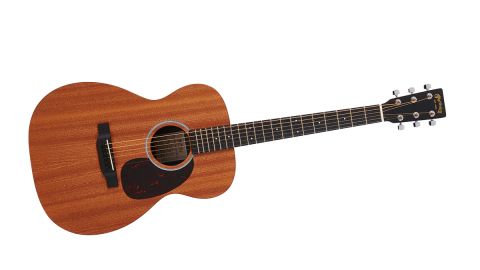 The results are so good, even tonewood snobs might change their tune.

The snappily titled 00X1SAE Westside Custom Sapele Edition #IV is built around the Martin 00 platform, but otherwise the spec is identical to the #II.

In this case, the solid Sapele top and black HPL back and sides form a much smaller package than a dreadnought. Again, the regular X-Series 00X1AE has a solid spruce top, so the slab of solid sapele represents the Westside version's major upgrade.

While Martin produced 00 size guitars in the preceding years, the style didn't really become popular until the 1930s when they fell into the hands of folk and blues artists. That demographic has stayed faithful to the 00 size format and you'll find this Westside Custom Edition is at its happiest being fingerpicked.

Like its stablemates, the guitar's slim birch laminate neck is paired with a Richlite fingerboard and 20 beautifully dressed frets. Richlite is a tough material that looks and feels like ebony. It's actually made from partially recycled paper compressed with a resin. So, yeah, it's about as far away from a desirable tonewood as you can get, but taken at face value, it does a good job.

The volume and tone controls for the Fishman SoniTone pickup system are tucked away inside the guitar's soundhole. Yes, they're a bit fiddly at first, but you soon get used to them.

The amplified tone is remarkably faithful to the 00X1SAE's acoustic voice. The solid sapele top adds warmth to what can be a bright-sounding package when topped with spruce. Like us, you might be surprised just how loud these small-bodied guitars can be, and that might snag some interest from those of you who think you need a dreadnought or jumbo to get your point across.