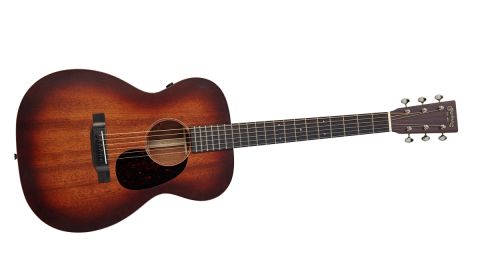 For once, we have some serious choice from a very serious guitar.

Martin might have the reputation as the heritage acoustic guitar company, but on so many levels, it remains remarkably advanced.

It's this wolf-in-sheep's clothing 'deception' that's at the heart of Martin's seven-strong all-non- cutaway 14-fret Retro series, to which this 00-15E was added earlier this year.

It's flanked by four dreadnoughts, one 000 and an OM, but is the only mahogany-topped Retro model, and also the most affordable. The old-meets-new duality of these Retro guitars is highly evident here: an old-school Depression-era design married with the sort of electronics than will take you to the moon and back. Well, almost...

But before we get to the spaceship bit, unplugged, the actual guitar might simply bowl you over on first strum. Why? As we remarked in our earlier review of the 00X1AE, the 00 is a pretty rare bird in Martin's line-up.

Yet if you prefer a smaller body guitar but don't want to drop right down to a 'parlour', it's a highly comfortable choice for the seated player - although Martin fits a second strap button on the heel and with these expanisve electronics onboard, you wouldn't want to waste that power if all you planned to do was strum and pick at home.

It's a beautifully simple, unadorned guitar with a single ring rosette, no edge binding, minimal inlays between the 5th and the 9th frets and a deep brown-hued satin finish with subtle sunbursting to the top only.

Tuners here are the not-overly-special open-backed Grover type, while the 'Modern Belly' ebony bridge, with ebony pins, has a compensated Tusq saddle - preferred for its use with the under-saddle pickup - and beautifully cut bone nut. Old-style small frets and a pretty low setup again hint at vintage, but the neck shape is more contemporary: a slightly V'd deep-but- not-big profile (21mm at the 1st fret; 23.4mm at the 10th) with Martin's wider nut width, just over its 44.45mm (1.75-inch) specification at 44.8mm.

Typically, the string spacing over that nut is maximised with a 39mm spread, while bridge spacing is airy at 54mm. The neck also has the shorter Martin standard scale of 632.5mm (24.9 inches).

In terms of detail, the top is braced with Martin's A-Frame 'X' bracing and the neck is joined with a 'simple' dovetail. It's all crisp and clean yet remarkably unshowy.

A quick gander inside the soundhole reveals a large PCB and multi-coloured ribbon wires, not to mention the circular control panel and dual multi-function control knobs placed above the waist on the bass-side upper bout. This all tells us we're on for something special: Fishman's F1 Aura+. "Aura Acoustic Imaging technology," says Fishman, "uses digital algorithms developed in Fishman's audio laboratories to restore a studio-mic'd sound to an acoustic instrument.

To achieve this, we've recorded this instrument using world-class microphones and techniques to capture an 'image' of the natural sound that it emits when mic'd in a professional studio. This image, when recorded direct or played through an amp, mixer or PA, blends with the under-saddle pickup to produce an incredibly accurate recreation of the original recording."

But don't worry if you're a technophobe: the typically clever design has an Easy mode where the upper knob is simply volume. When you press it down, it mutes the output and engages the tuner. The lower control, rotated, adjusts a mid-scoop or, pressed, selects one of the three onboard Aura images or the standard undersaddle 'dry pickup' sound.

For the more "adventurous player", says Fishman, we also have the Performance mode with its Play and Edit functions. In Play, we still have the tuner and volume, blend (between the Aura image and the dry pickup) and phase can be adjusted - plus, there's a neat anti-feedback circuit. In Edit you can specifically tailor, and save, each Aura image with three-band EQ, image/pickup blend, compression and anti-feedback. And once you've carried out any tweaks you want to make, you can return to Easy mode. Got that?

Electronics aside, this is a really characterful instrument, which might surprise you, even if you've played smaller bodied all-mahogany guitars. It did us. The hardwood top (as opposed to softwood spruce, or even cedar) imparts a more fundamental tone without the sparkle or explosiveness of spruce. It has a lovely rounded high end, with a balance in the bass that has more 'classical guitar' to it than the design might suggest.

Mids are solid but far from over-cooked, so we avoid the mid-honk of many smaller body designs. The shorter scale means a subtly relaxed string tension and a more intimate voice, perhaps - it's certainly a picker's dream, especially for more reflective styles.

But use a pick and that evenness is going to win you admirers in a studio or live setting as a rhythm player, helped by a compression when you hit it hard that won't have the sound engineer reaching for a limiter. We're swayed, and we haven't gone near an amp.

Beginning in Easy mode, you can listen to the 'dry' pickup sound. It's a fairly accurate representation of the acoustic voice - though a little dark for some tastes perhaps - and certainly benefits from adding a little mid- scoop from the tone control. The three images, which subtly vary, all add more acoustic-like 'reality'.

The ability to change phase and add the mid-scoop (treble and bass boost) actually means you have plenty of control. If you're working with outboard EQ (and/or a sound person) you might never need to enter the more complex Performance mode.

When you do, however, you have the chance to tweak each of the now nine images, three- band EQ on both the dry pickup and image, pickup/image blend, compression and anti- feedback (a neat auto system). Changes are automatically stored so you could easily have either subtly or quite contrasting 'voices'. Use is everything, however: the more familiar you are, the more you'll be able to maximise the frankly vast and good-sounding potential.

There's a Jekyll and Hyde character here, which - for certain players au fait with more modern technologies - produces a highly versatile, creative sound palette that looks like it came out of the Great Depression. It's a really anti-Taylor-like statement: old-looking and utilitarian, but with pretty much state-of- the-art onboard technology.

If you don't need the technology, you can still use the instrument in Easy mode, which might just be the perfect compromise, especially if you have your own outboard acoustic rig.