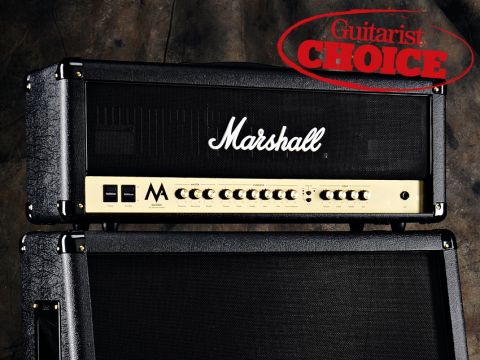 After an affordable, powerful rock amp with visual wow factor? Put this at the top of your list!

Marshall has been a hive of activity of late, with a string of high-profile releases including the new solid-state MG series, the lowcost Haze series and the Class 5 combo. Marshall's historical lifeblood is its 50- and 100-watt models, however, a market that's been attacked in the midprice range from all fronts.

It's a good time then for Marshall to release its new bread-and-butter amp range - the MA series. We spoke with Marshall's head of R&D, Laurent Veignal, to learn more. "We were losing share in the low-end valve market," he says frankly, "and we wanted to have something to compete in that segment."

"That was our first and most important decision, because we know we can really compete - we've already got a range of successful OEM [Original Equipment Manufacturer] products with the MG series."

So, who is the new range aimed at specifically? "The series runs between 50- and 100-watt head and combo variations and so really it's aimed towards people who are actually gigging - in pubs and other such places," says Veignal.

The MA100H follows the same general feature template as the MA50C combo, but with twice the power supplied by a quartet of EL-34 power valves. Where Marshall's concerned, keeping that classic modern Marshall look was essential for the MA series, but alongside the usual gold-fronted control panel and black vinyl covering, the clever chaps over at Bletchley R&D have a rather neat trick up their sleeves…

On first inspection, the front baffle looks like any other Marshall-style baffle board, until you power the amp up. Two bright orange LEDs illuminate the interior of the cabinet and highlight the power valves spectacularly.

This effect is visible through the black cloth, where the white Marshall script logo is mounted onto a solid piece of transparent Perspex. This is a neat effect, and gives those previously uninitiated into the valve-amp world some real visual wow factor - it looks great on a darkened stage!

This full-size Marshall 4 x 12 cabinet (£287) is designed specifically for the 50- and 100-watt heads in the MA series, but also offers players with other Marshall head models a cheaper option than the stalwart 1960 4 x 12.

The angled-front cab we have here is loaded with four 12-inch Eminence AX-75 speakers, designed to offer clarity, power and punch for optimal valve-amp rock tone. The cab is built on usual Marshall high-quality cabinetry, using interlocking finger joints for strength, rugged plastic corners and built-in plastic carry handles. Rather than ply, it's a particleboard cab.

Like the combo, the MA100's clean channel is voiced right in that British tone camp. Through the accompanying 4 x 12 it's even more strident in the top-end with a glassier overall response, though it's by no means excessively shrill or brittle.

It's also notable that at higher volumes the response tends to fatten up and adds some mild fizz round the edges, which works really nicely with a Strat or soapbar single-coil-equipped guitar. The reverb again helps to add ambience to what can be quite a hard tone.

Working from the boost overdrive channel downward, we find the MA100H to have a fuller and harder response compared to the more compact MA50C. The boosted tone is rich and responsive, with a huge amount of silky gain that can surely cater for most heavy rock and metal needs, while offering those with low-slung Les Pauls a really sumptuous classic rock lead sound.

Again, the amp is pleasingly transparent and delivers a lot of your guitar's original character - great if you like to use different guitars to get different tones.

The MA series is an impressive step into the low-priced valve amp market for Marshall. Designed to appeal to serious minded players on a budget, or those keen for their first all-valve experience, the MA series offers you a no-brainer choice - especially those with blues-rock to heavy rock and metal tastes.

At 50- or 100- watts, though, this series is definitely not for bedroom heroes - they sound and perform best when cranked up loud to proper gig levels. The MA50C is well put together and tonally versatile, making it ideal as a go-anywhere, small-medium gig and rehearsing amp.

The MA100H is very much the louder, bigger brother with plenty of rock attitude to suit budding stadiumites - we love the see-through front too. All in all, we're talking superb value for money, no-nonsense noise machines that say Marshall on the front: none more rock!