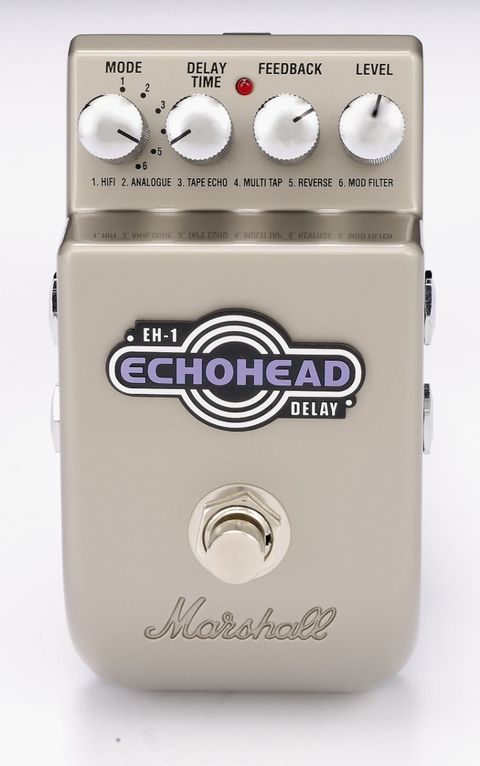 The Echohead offers plenty of processing power for the money. It's a versatile delay with a small footprint.

Launched in 2006, Marshall's current pedals reiterate that the race is on to see just how many functions can be crammed into a single stompbox. The EH-1, and its sibling pedals the RF-1 reverb and RG-1 modulator, pack six individual voices each.

Marshall's redesigns means the metal footswitches are now a little larger and more confidence inspiring than those initially featured on their pedals, but otherwise the housings are virtually identical. The units themselves feel weighty and hard-wearing, and we still think that the battery access panel that can be opened with a coin is a great idea. Even if you haven't got a screwdriver mid-gig, somebody will always have a coin.

The Echohead's delay time, feedback and level controls shape the signal exactly as one would expect, but the real power lies in the pedal's six-position mode control. Between position one's hi-fi digital delay and position six's psychedelic mod filter, sounds range from simple clean repeats to retro-styled analogue and tape delay simulations, along with more specialist effects such as multi-tap, modulated and reverse delays.

Alongside the instrument input is a jack socket for the connection of a momentary footswitch which functions as a tap tempo control. In addition, a pair of output jacks offers more than simply stereo operation. When the pedal is connected in mono to output one, a passive bypass circuit kills the effect completely when it is disengaged. Connecting to output two alone is also mono, but this time when you disengage the effect, any remaining repeats will 'spill over' and naturally decay over whatever else you are playing. This is useful and gives you the option to segue less abruptly between sections of a track that require different sounds than if the delay repeats were simply cut dead.

With both outputs connected, the EH-1 gives you stereo operation and ping-pong delay, as in this configuration the delay time of output two, the right channel, is half that of output one. There is no way for the spill over to be activated in stereo mode, but that said, the configuration options and sonic flexibility are still impressive for a stompbox with such a small footprint.

Flipping through the modes, it quickly becomes clear that the Echohead contains more than enough options for most people's delay needs.

For a touch of light slapback for rockabilly, the tape echo setting is voiced very well indeed, while reverse evokes those blissed-out peace and love moments with aplomb. However, it's worth noting that because the level control doesn't allow for a 100 per cent wet signal you'll always be able to hear the attack of the original notes.

The analogue simulation is solid enough, with the requisite murky edge as repeats degrade, but fans of this kind of delay may find the kind of aural chaos usually on tap when the time and feedback knobs are manipulated to be a little disappointing. It's not as musical as the equivalent sounds on some digital modellers, or indeed those delivered by an authentic analogue chip. That said, fans of more pristine delay voicings will like the hi-fi and multi tap modes on offer.

Overall, the basic sounds don't quite scale the heights achieved by Line 6 units, but the Echohead is quite a bit cheaper than Line 6's Echo Park.