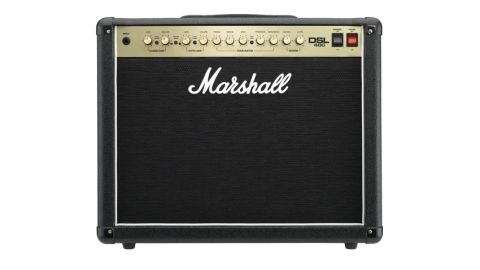 Undoubtedly one of the most compelling sub-£700 combos around.

From Hendrix to Slash, Iron Maiden to Spinal Tap - if guitar royalty has one thing in common, it's that they all bow down to the majesty of Marshall guitar amplifiers.

Aside from a quintet of special 50th anniversary models, 2012 also brings a refreshed line-up of DSL (Dual Super Lead) amps. Originally launched in the late 90s as part of the JCM2000 range, the DSL amps proved a huge hit and were critically acclaimed as a modern classic.

The new range includes a 15-watt head and combo, and a 100-watt head. In between the ultra-portable and the ultra-loud sits the DSL40C.

As ever, simplicity proves itself to be the backbone of great design, but that doesn't mean Marshall has skimped on features. Like the original DSL, you've got two channels, divided into Classic Gain and Ultra Gain. Each also has two separate modes, giving you four different voices to play with.

The Classic Gain channel is split into clean and crunch, but by using the gain control sparingly, there's still plenty of scope to keep the clean pristine or introduce a hit of 'Plexi'- style dirt. The crunch actually covers a surprisingly wide range; there's more than enough to nail the coveted Marshall saturated crunch that the likes of AC/DC have made so iconic.

The Ultra Gain channel, on the other hand, caters to the heavier side of life, and starts with the JCM800-influenced Lead 1, a searing lead tone that 80s metal fans in particular will lap up.

For those in need of an extra push, the Lead 2 tone stacks up even more gain and also a boost in the mids. We're into Zakk Wylde and Kerry King territory, and it's here that the tone controls come into play.

While some players may be put off by the shared EQ, try it before you jump to conclusions. As with the original DSL models, there are the usual presence, bass, middle and treble controls, but this time, instead of a deep switch adding an extra kick of bass to the power amp stage, you've got a resonance control, a popular feature on many high-gain amps.

Dialling in the low-end is much more precise as a result of this - it's just the ticket for keeping the balance when you're scooping the mids for some intense metal riffery. Speaking of which, the final switch on the front panel is labelled Tone Shift and, as an instant mid-scoop, is a one-way ticket to thrash metal grind.

Sonically, the DSL is as great as it's ever been, if not better. Unfortunately, it's also got the weight to match, and after a couple of days carting the amp around the houses, we'd give our kingdom for a couple of side handles.

The other downside is that, for such a feature-packed amp, the supplied footswitch only manages a channel switch and reverb control.

Despite this, the DSL40C is a keen reminder that Marshall has earned every one of those 50 years at the top.