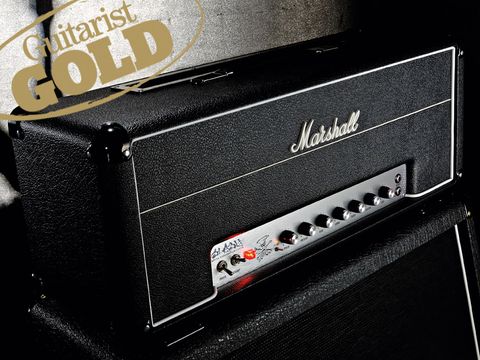 If you want to rock like Slash, this will make every dream of great tone you've ever had a reality.

Back in the mid-eighties, when everyone was beginning to say the age of the guitar hero was over, along came a guy called Slash to prove them all wrong.

Ever since, for over 20 years now, Guns N' Roses' seminal Appetite For Destruction album has been one of the great benchmarks of modern electric guitar tone, catapulting the Les Paul/Marshall combination back into pole position, where it remains to this day.

Getting the exact tones that Slash used on that album has become an obsession for many of his fans, especially as the equipment was far from standard issue. As a result, the amps and guitars have developed their own legends over the years; none more fascinating than the story of the infamous SIR-modified Marshall heads Slash used for most of the rehearsal and recording sessions.

As if helping to create the biggest debut album in history and turning himself into a rock icon wasn't enough, Slash also created a piece of amp history when his name appeared on Marshall's first ever signature head, the JCM2555SL, based on the Jubilee model.

That was way back in 1996, but last January at the NAMM show in Anaheim, California, Marshall announced it would be producing a new Slash-approved signature head, intended to precisely capture the tonal magic of Appetite For Destruction.

For months we've all been following the blog on the amp's own dedicated website, and now finally it's ready to rock. Does the reality live up to the dream?

Outwardly, the AFD100 is a smartly finished full-width amp head with some interesting detail work that reflects its duality: intended to mimic the modified 1959 and 2203 heads Slash is most known for using.

The cabinet has the wider side panels of a JCM800, but the slimmer top and bottom panels of the 1959, trimmed with fat and skinny white piping and a small script logo.

Tying in with silver handle caps and corner protector nails, the silver control panel is finished in a unique brushed and anodised snakeskin effect, with control legends in a custom script.

The extra deep steel box chassis is typically robust; it needs to be as it supports the weight of two huge transformers, both of which seem about the same size as a small family hatchback!

Almost all the electronics are contained on through-plated printed circuit boards, with a mix of conventional and surface-mount components: one large board holds most of the preamp, power amp and power supply stuff, including all the valve bases.

There are smaller PCBs for input jacks, speaker jacks, effects loop, bias controls and front panel knobs. Most of the wiring terminates in Molex-style connectors and is neatly routed and tied.

The AFD100 is a single-channel design with some interesting additions: primarily the ability to morph between JCM800 and 1959 characteristics using a footswitch or a small front panel toggle. There's also a newly designed built-in attenuator that lets you dial-in power amp drive at any volume level.

The AFD100 also features a foot-switchable effects loop, and a clever automatic biasing function that doesn't even need a meter.

The engine room is a quartet of suitably massive-looking 6550s rather than EL34s, which is an interesting and period-correct choice. At the time the album was being recorded, getting EL34s out from behind the Iron Curtain was far from easy and the quality was unpredictable to say the least, so many Marshalls were shipped to the States without power valves and fitted with 6550s - a high-powered version of the 6L6 - on arrival at the USA distributor.

The AFD100's front panel features two input jack sockets, while the rotary controls are simple and easy to understand: presence, three-band EQ, gain and volume. The power control is at the far left of the panel, next to the traditional mains and standby toggle switches that are used in preference to the later rocker type.

The back panel features comprehensive speaker outlet selections for four, eight and 16-ohm loads, and a pair of send/return jacks, with a return level knob for the AFD100's effects loop. There's a trim pot for initial bias setting, and next to this are four red LEDs that indicate a power valve fault.

The overall impression is one of solid professional-standard craftsmanship and clever, understated design that doesn't get in the way of functionality - just what we've come to expect from Marshall.

Powered up, the AFD100 comes to life with practically zero hum and the merest of hiss, indicating that there's plenty of gain on tap. In '#34' JCM800 mode, the AFD provides the tone Slash used from Use Your Illusion onwards, with maybe a little more polish than an original 2203 and a much smoother, more predictable response from the EQ.

Like an original JCM800 the treble response is still quite fierce, but when used in the environment it was intended for, this translates into a sound that's capable of cutting through any mix with ease.

Activating the AFD mode switches in even more gain, pushes the mid-range forward and fills out the bass for a truly monumental rock guitar sound. The 6550's wider frequency response preserves clarity and note definition, making it easy to hear everything even at full throttle.

This amp demands humbucker ignition, so in the absence of a Derrig or Max replica Les Paul we used a '94 PRS McCarty, with which the AFD100 was producing all the right sounds in no time at all.

The mid-range control was especially impressive here, providing excellent scooped tones when turned down and refusing to go nasal when pushed up beyond halfway.

If you've got the talent and dexterity you can easily nail any Slash solo or riff from the AFD album with authenticity, while the built-in attenuator lets you drive the power amp hard without sacrificing your eardrums. It works very transparently too, without upsetting the amp's carefully sculpted sounds or its excellent touch-sensitive response.

As well as duplicating practically any Slash tone, the AFD100 can also capture almost any classic Marshall sound from the last 30-odd years with ease - Blackmore, Trower, Page, you name them - we ran through a list of classic riffs and ticked every box without hesitation.

The AFD100's simple series effects loop works quietly, and with a defeat button on the amp's footswitch, it's easy to use too - a quick tap is all that's needed to remove the loop from the circuit and give you the unadulterated valve power.

Signature models sell, although amps aren't quite as easy to shift as guitars, particularly if they contain oddball features that are there on the whim of an artist.

However, Slash's collaboration with Marshall's gifted design team has resulted in a truly brilliant product that can probably lay claim to being capable of realising everyone's dream of what a great Marshall amp should sound like.

What's even more impressive is the way that it's been achieved from such a simple, uncluttered set of controls. No fiddling presets, no need to spend ages tweaking - everything works, and works so well you can just forget the physics and concentrate on playing the guitar, which is what it's all about.

Having said that, it isn't very practical if you can only afford one amp - the AFD100's high gain means there really aren't any proper clean sounds, although if this is your kind of amp you'd probably respond by saying 'so what?'

As for competition, there are other amps that come close to providing a similar experience on a good day, but none of them come with two of the most famous signatures in rock on the chassis, and then there's the price, which is very reasonable.

Because the AFD100 is going to be a limited edition with just 2,300 units available worldwide, it's also going to be collectable and we wouldn't be at all surprised to see them selling for several times the retail price in years to come.

Mission accomplished, Marshall! The AFD100 is one awesome rock amp - don't delay, get your order in now or regret it forever.