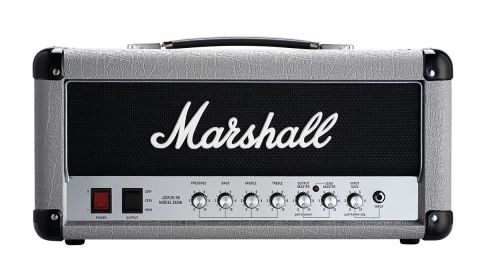 Well worth checking if size and space are an issue for you.

Marshall's model 2555 Silver Jubilee amp was released in 1987 to celebrate 25 years of amplifier production and Jim Marshall's 50th year in the music industry, hence the 25/50 addition to the original model designation.

It rapidly became very popular, thanks in part to a reworked EQ section and pentode/triode switching. This made it easier to drive the output stage properly and get that elusive blend of power amp grind and preamp drive, together with a smoother and more predictable EQ, which didn't have the peaky midrange that affected some other models from that era.

Together with quiet channel switching and a selectable clean or clipped rhythm channel, the Jubilee had a diode clipping circuit in the preamp, adding extra gain, but in a more controlled, consistent manner and with less noise - all of which made the Jubilee a great player's tool at a time when choice was much more restricted than it is today.

The original silver-grey amps were limited editions and only offered for sale during 1987. Despite the interest in them (stoked by a certain Mr Hudson since the 1990s and more recently by Joe Bonamassa), Marshall resisted the calls to reissue until last year, with the arrival of the 2555X.

Now, a full-sized Marshall head and 4x12 cabinet take up a significant chunk of living space, so for those who crave the 2555 tone but in a more compact package, the company has added a new version called the Mini Jubilee, which is available both in head and combo versions.

The 2525H and 2525C amps are made in the UK at Marshall's Bletchley HQ, and look just like slightly scaled-down versions of the original. The cabinets are perfectly coveredin silver-grey vinyl, with matching chrome metalwork rather than the traditional gold finish.

The electronics are held inside a rigid steel chassis with one large PCB holding most of the components, including all the valve bases. Layout and wiring are typical of Marshall's high standards.

Both the head and combo have identical controls, featuring gain, presence, bass, mid and treble. There are two master volume controls: an output master and a lead master, used for balancing rhythm and lead levels.

A pull-switch on the gain control adds a significant crunch to the clean voice, while another on the switch on the output master changes channels. The three-position standby switch has two power settings: either full power (20 watts) or low power (five watts).

Around the back, you'll find a simple series effects loop, frequency-compensated DI output, and five speaker jacks covering every hook-up possibility, together with a socket for the one-button footswitch that toggles channels. Despite the reduced dimensions, the Mini Jubilees are top-quality British-made amps that are capable of handling anything you might throw at them.

We auditioned the Mini Jubilees with a variety of guitars, including a PAF-loaded Les Paul and a Strat with regular-output Seymour Duncan Alnico Pros.

The head is electrically quiet in operation, with minimal hum and only a little hiss when wound up. Jubilee amps have a diode clipping circuit, which is a cost-effective way of adding extra gain without going to the expense of a bigger power supply to handle the extra current draw of another 12AX7.

It also has a particular sound, very much part of the Jubilee's character and one of the reasons why they are so popular. Teamed with the wider ranging EQ, the Jubilee's distortion tones are somewhat smoother and more controlled than the JCM800, with less of the nasal peak that some earlier JCM800s have.

The Mini Jubilee captures the 2555's roar very authentically. Combined with a Les Paul, it's great for 80s and 90s-inspired rock, with a bold, fast attack, woody midrange thump and a surprisingly fat bass from the combo, thanks to the rear-ported Celestion G12M Greenback loudspeaker.

GN'R hits such as Sweet Child O' Mine and Welcome To The Jungle sound very authentic and any Slash or Bonamassa fan is going to be pleased with the results. The Jubilee also does a great Billy Gibbons Eliminator-era sound with the gain nearly fully up, with perfect edge-of-the-pick harmonic squeals.

Marshall isn't known for building shy, retiring amplifiers and the Mini Jubilee is no exception. The head's power is, of course, dependent on its speakers. We tried it with a Vintage 30-loaded closed-back 4x12 and this combination was impressively loud enough for most gigs, as long as clean headroom isn't a prime requirement - which is not usually a problem for Marshalls.

The new Mini Jubilees are likely to be very popular, blending the coveted tone and good looks of the original 2555 with a smaller and more portable package that's aimed mostly at home and studio users.

They're made in the UK in Marshall's famous Bletchley factory, so they're not the cheapest 20-watters out there, but both the head is built to withstand any kind of abuse and keep sounding and looking good for decades.

The amp tones are well up to the mark, with all the punch and bite of the original 2555, together with the same smooth, predictable EQ that's so easy to dial in.

Our only disappointment is that currently there isn't a smaller matching cabinet available for the head. A pair of Greenback-loaded 1x12s in the same silver-grey livery as the head would make a superb mini-stack with the versatility, portability and great looks to match that classic 80s rock tone.