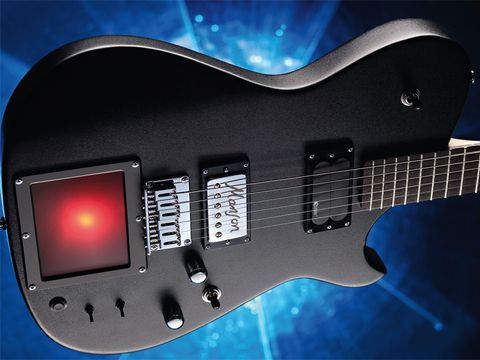 Finally you can buy the exact same guitar that Matt Bellamy uses. It comes at a price, but remains a unique collaboration between artist and luthier.

As a premier British guitar-maker, shop-owner and touring tech to the likes of Led Zeppelin and Them Crooked Vultures star John Paul Jones, Hugh Manson is a busy man.

Thankfully for us, however, he's found time to launch his first signature model, founded on his long-time association with Muse's Matt Bellamy, who plays numerous Manson guitars.

As the owner's certificate included with each MB-1 Standard attests, "the instrument has been crafted combining the talent and artistic expression of Matthew Bellamy and the manufacturing expertise of Hugh Manson. Each instrument has been constructed in the UK using the finest components and unique custom electronics, replicating the shape and features of the stage guitars used by Matthew Bellamy".

See it in action alongside the Parker Fly Mojo MIDI here, or click for more video:

Each certificate is signed by both parties. The MB-1, based on Bellamy's own cracked mirror M1D1, is built in batches of 25. The first batch was announced earlier in 2009 and sold out in a matter of weeks. At the time of writing, a second batch has yet to be announced, but with Muse's ongoing worldwide tour in support of their latest album, we'd be surprised if demand doesn't continue.

The MB-1 is far from some successful artist's 'take the money and run' concept. Tipping the 3k mark, however, it's far from cheap, but it is a very serious instrument, loaded with some pretty clever toys. Underneath the technology is an extremely well-made, yet simple, solid body electric.

Its stretched Tele outline replicates Matt's original design in style, although the body is a little longer to make space for the X-Y MIDI control pad, and that upper shoulder is slightly downsized. Only two finishes are offered, the standard matt textured black, as here, or a gloss red glitter, which adds a further £200.

Hugh has made a few necks in his time and this clean, satin-finished birds-eye maple bolt-on is a corker - Fender-style in dimension with a slight 'V' profile maximising depth and stiffness, without feeling overly bulky in the hand.

The dark rosewood 'board only has side dots, a compound radius and finely installed medium gauge frets. Load on top-of-the line Gotoh hardware - including those beautiful 512 tuners with height adjustable posts to maximise the down pressure over the graphite nut - plus a slinky, clean set-up and, like we said, this guitar is beautifully crafted simplicity.

With its mainly black livery, from a few feet away the extra black switches and buttons almost disappear. But even if they were more visible, it's a testament to the design that the MB-1 is actually a pretty easy drive. At the bridge we have a covered Manson/Bare Knuckle humbucker, modelled closely on Bare Knuckle's own Nailbomb.

At the neck there is a humbucker-sized Fernandes Sustainer (one coil is the sustain driver, the other a standard single-coil). The dual pickups are controlled by a black-tipped three-way toggle placed near to the closely-spaced chromed metal Tele-style knobs of the volume and tone controls. Below are two black-plated mini switches (Sustainer on/off and Sustainer mode). The upper shoulder houses a second three-way toggle - a centre-off killswitch.

For many of us, this alone would be our dream guitar (well, perhaps with a vibrato), but the MB-1's largest visual clue to its sonic potential is the black-rimmed screen at the base of the guitar: an X-Y MIDI controller pad, set up out of the box to use with both Korg's KP-3 Kaoss Pad and DigiTech's Whammy pedal.

Of course, all this electrickery needs power and the MB-1 uses two 9-volt blocks (no power consumption is quoted) housed in their own rear cavity. Two separate outputs offload the info: standard jack and five-pin MIDI outputs. Now, all that we need to do is get out heads around the Manson's technology…

As you should expect at this price range, the feel, playability and set-up are first class. The frets aren't overly heavy and it actually feels really quite classic in that regard, with an excellent weight and strapped-on balance. Played unplugged, it produces a clean, ringing response.

The MB-1 is actually a straightforward guitar, with the exception of its Sustainer/MIDI capabilities. The bridge humbucker kicks out a big sound, full strong mids, thumping bass-end and rounded, slightly muted highs. The single-coil neck pickup is lighter, but actually quite well matched tonally - full and tubby, with a little of a single-coil's classic edge.

The dual pickup mix adds some more hollowed jangle, and on this guitar (a custom modification) we have a pull/push switch on the tone that splits the bridge humbucker and gives the MB-1 a funkier edge.

It's with a thick-gained amp that the MB-1, not surprisingly, feels most at home. Chords and riffs sound big, but still quite organic, and flicking in the Sustainer (which automatically voices the bridge humbucker only) just adds to the fun.

The killswitch isn't the quietest we've encountered, however, with quite a low-end thump as its switched out and a little crackle too. Also, with the Sustainer on, you can hear a little 'bleed' from the pickup when it should be muted.

Whether or not your MIDI lead is plugged into anything, the control screen glows in a variety of otherworldly colours. Plugging into a DigiTech Whammy pedal illustrates the potential. By moving your finger from treble to bass side on the screen (it only works on this one axis here) your finger effectively 'moves' the pedal's treadle.

Now, you could do that with your foot, but the interesting thing is that you have much more control. Tapping two fingers on the screen creates pitch effects you just can't get with your foot alone and for onstage show-offs you're not rooted to the position of your pedal, just the length of your MIDI lead.

The Korg Kaoss Pad is well-named. Designed to treat, effect, filter and sample virtually any kind of audio, it's an Aladdin's cave for the adventurous and a definite no-go area for the "a smattering of chorus is as far as I go" brigade.

A couple of hours spent experimenting with the Kaoss Pad left us slightly queasy. Some of its effects seem to work better than others with the control screen: LFO and filter patches (with a dollop of heavy gain and the Sustainer on) are obvious places to start - thankfully you can save at least some of your experiments.

Less extreme uses would obviously include altering distortion gain and tone parameters, so long as your FX unit (or software) can be MIDI controlled.

The MB-1 is a rare bird: a British-made signature guitar for a unique British guitarist. Matt Bellamy's embrace of technology is reflected in this guitar, which as far as we're aware is totally unique.

But for all those plus points it remains an expensive piece. You'd have to be a huge Bellamy fan, or very confident that you can use the sound manipulation potential it offers in your own musical landscapes, to get your money's worth. Otherwise, there are cheaper ways to achieve similar results and, of course, you'll still need a Kaoss Pad or MIDI FX to use all of the MB-1's features.

On its own it's a mighty fine rock guitar with onboard Fernandes Sustainer - something Fernandes do quite nicely at a far lower price and that will happily integrate with a Kaoss Pad, although manipulating that unit's touchscreen is certainly not as convenient as having it built-in to the guitar. All in all a great job, but it does come at a steep price.